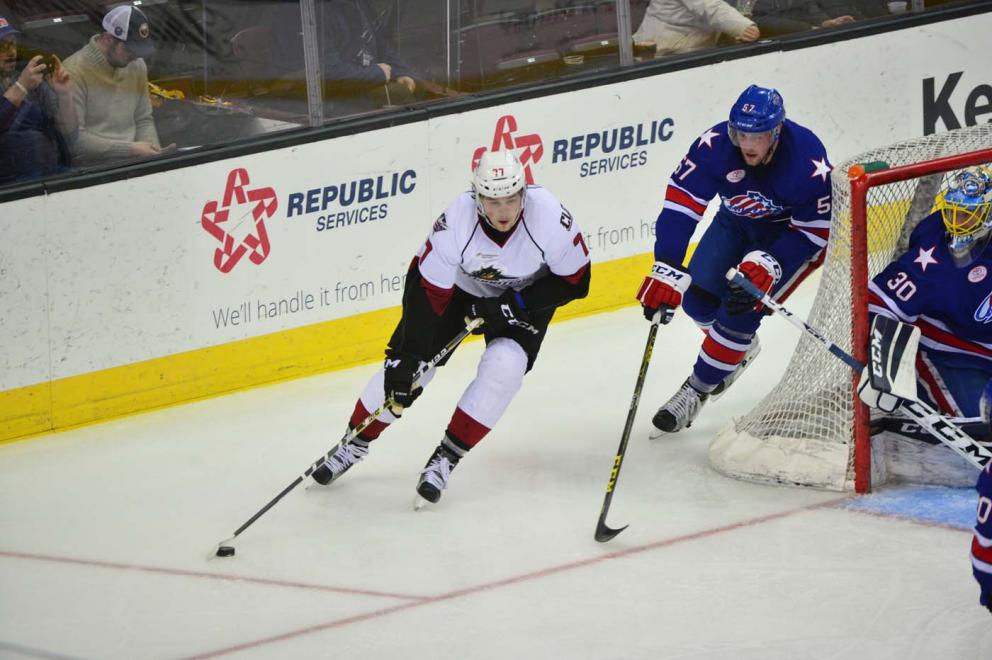 CLEVELAND – In the second of four meetings between the two teams this season, the Lake Erie Monsters defeated the Rochester Americans on Thursday at The Q by a final score of 5-2. With the win, the Monsters improved to 28-17-5-4 overall this season and with a .602 points percentage, currently rank alone in third place in the AHL’s Central Division standings.

The Monsters posted the opening frame’s lone score on Thursday, a center-point power-play strike from John Ramage at 8:39 that made it 1-0 Lake Erie, with Oliver Bjorkstrand and T.J. Tynan collecting assists on the play.

In the middle frame, Lake Erie’s Daniel Zaar made it 2-0 with an even-strength one-time finish at 1:48, set up by Alex Broadhurst and Michael Chaput.

The Monsters added a power-play marker from Broadhurst at 8:31 of the second to make it 3-0 with Chaput and Steve Eminger registering assists on the play. Rochester got on the board at 14:18 thanks to an even-strength Jerry D’Amigo goal, but Lake Erie’s Sonny Milano pushed his team’s advantage to 4-1 with an impressive even-strength backhand finish at 17:18 on feeds from Manny Malhotra and Monsters net-minder Anton Forsberg.

In the third, D’Amigo struck again for Rochester at 14:30 to make it 4-2, but at 17:03, Lukas Sedlak found Josh Anderson in the neutral zone and the Lake Erie winger slugged a long-distance wrist shot into an empty Amerks net to cap the scoring at 5-2 Monsters.

Forsberg improved to 14-8-3 in net for Lake Erie by virtue of a 25-save performance while the reigning CCM/AHL Player of the Week, Linus Ullmark, took the loss for Rochester after stopping 25 of the 29 Monsters pucks he faced.

Next up for the Monsters, it’s a Friday home clash vs. the Rockford IceHogs with full coverage, live from The Q, underway at 7:00 pm.