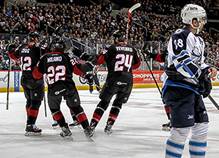 WINNIPEG, MB – Thanks to a strong performance from goaltender Joonas Korpisalo, Cleveland’s Lake Erie Monsters defeated the Manitoba Moose 2-0 on Saturday at the MTS Centre in Winnipeg, Manitoba.

With the win, the Monsters improved to 3-1-0-1 overall this season and 2-0-0-0 vs. the Moose. With seven points and a .700 points percentage, Lake Erie pulled into first place in the AHL’s Central Division standings for the first time this year.

After a strong start to the game, the Monsters grabbed a 1-0 lead at 8:48 of the opening period when Ryan Craig tipped home his second marker of the season on a Dillon Heatherington center-point blast, set-up by T.J. Tynan.

After a scoreless middle frame, Michael Chaput gave the Monsters some breathing room less than a minute into the third, when the Ile Bizard, Quebec native poked home his third goal of the season and third in his past two games, thanks to a visionary backdoor feed from Sonny Milano.

The real story on Saturday, though, was Korpisalo. Often in spectacular fashion, the Pori, Finland native was named ‘First Star’ of the game and stopped each of the 29 Moose shots he faced to notch his second consecutive shutout to start the season. Manitoba’s Eric Comrie made 30 saves in defeat.

Next up for the Monsters, it’s a Thursday showdown vs. the Charlotte Checkers at The Q.