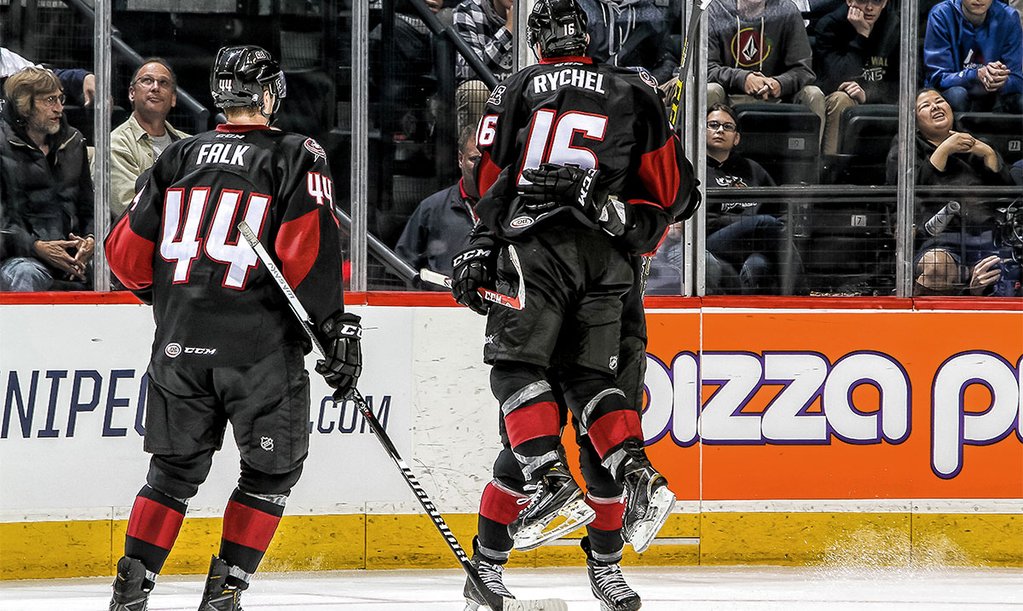 WINNIPEG, MB – Cleveland’s Lake Erie Monsters, proud affiliate of the NHL’s Columbus Blue Jackets, defeated the Manitoba Moose by a final score of 3-1 on Thursday at the MTS Centre in Winnipeg, Manitoba in the first of eight meetings between the two teams this season.

With the win, the Monsters improved to 2-1-0-1 so far this year and with five points and a .625 points percentage, currently sit alone in second place in the AHL’s Central Division standings.

In a fast-paced opening frame, the Moose struck first when Joel Armia wired home a power-play goal at 11:57 of the period to give Manitoba a 1-0 lead through 20 minutes.

In the second, the Monsters broke through at 13:45 when Lukas Sedlak wristed an equalizing goal past Moose goaltender Connor Hellebuyck at even-strength at 13:45 with Kerby Rychel and Justin Falk providing the assists on Sedlak’s first of the year.

Then, at 15:13, Nick Moutrey fed a wide open Michael Chaput from behind the Manitoba net and Chaput potted his first marker this season to give Lake Erie a 2-1 lead, their first advantage of the game.

Backed into a corner, the Moose fought hard in the third, but the period slid by scoreless until Monsters captain Ryan Craig fed Chaput in the game’s final minute, and the Ile Bizard, Quebec native found the empty net for his second score of the game and the season, establishing Lake Erie’s final margin of victory at 3-1.

Monsters goaltender Anton Forsberg improved to 2-1-0 on the season thanks to a 17-save performance while Hellebuyck took the loss for Manitoba despite halting 33 Lake Erie shots on goal.

Next up for the Monsters, it’s a Saturday rematch with the Moose at Winnipeg’s MTS Centre.