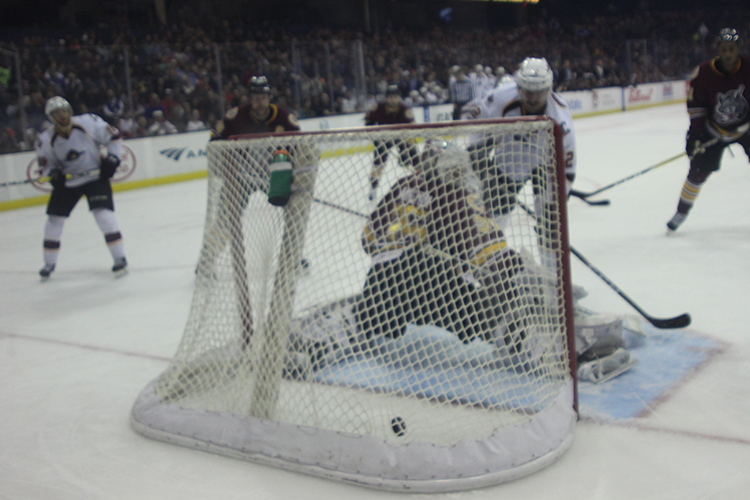 ROSEMONT, Illinois- The Cleveland Monsters made a trip to the Windy City on Saturday night, as they took on the Chicago Wolves at Allstate Arena for their last regular season matchup.

The game started off with a lot of back-and-forth offense until Wade Megan broke the scoreless tie at the 8:40 mark of the first. Megan received a cross-ice pass from a teammate from the blue. From there, he worked towards goaltender Anton Forsberg’s right side and beat him on his stick side to put the Wolves up 1-0. Ironically enough, Megan would give Cleveland their best opportunity to score in the frame and the Monsters would not falter. Sam Vigneault would put home the puck to tie the game at one at the 19:33 mark to capitalize on the Cleveland power play. It was also Vigneault’s first AHL goal, as he joined the team not too long ago and is surely coming along nicely. The Monsters would head into the break tied at one and definitely had a lot of chances to score, as they outshot Chicago 17-6 in the opening frame.

The second stanza was all Cleveland, as the team erupted for two goals in the frame. The Monsters controlled the puck for a majority of the time and definitely made the most out of their opportunities. The first goal in the frame came from Justin Scott, who followed up a Ryan Craig shot from the slot and sent it to the back of the net at the 8:04 mark. Craig would also score in the frame, as he received a pass near the crease of goaltender Jordan Binnington and jammed it past Binnington for the marker at the 9:54 mark of the second.

Zac Dalpe kept the good times rolling for the Monsters with a marker at the 1:31 mark of the third period. Dalpe fired a wrister from the left faceoff circle past Binnington to score, as the Monsters had completely taken the energy out of Allstate Arena. Tage Thompson would get Chicago one more goal on the board at the 4:43 mark, but Markus Hannikainen put the game away with his score at the 9:01 mark. The Monsters would take the victory by a final score of 5-2.

Coach Madden talked after the game about the quick pace and technical aspect of defeating Chicago.

“We were rolling our shifts over real good, keeping them under thirty seconds and I think we caught a few of their lines out there tired. That might have been the difference in the game.”

Gabriel Carlsson made his debut tonight and picked up his first AHL point in the win. Here’s what Carlsson had to say after the game.

“Yea, it was a fun game. A little bit different game from back home in Europe but (I) got a lot of help from the guys.”

“I loved his game.” stated Coach Madden when talking about Carlsson during postgame. “I thought he competed hard. I thought he has a lot of real good fundamentals and he’s gonna be a real good hockey player.”

It’s on to Iowa for the Monsters, as they continue their hunt for that final playoff spot with a Sunday battle with the Wild.