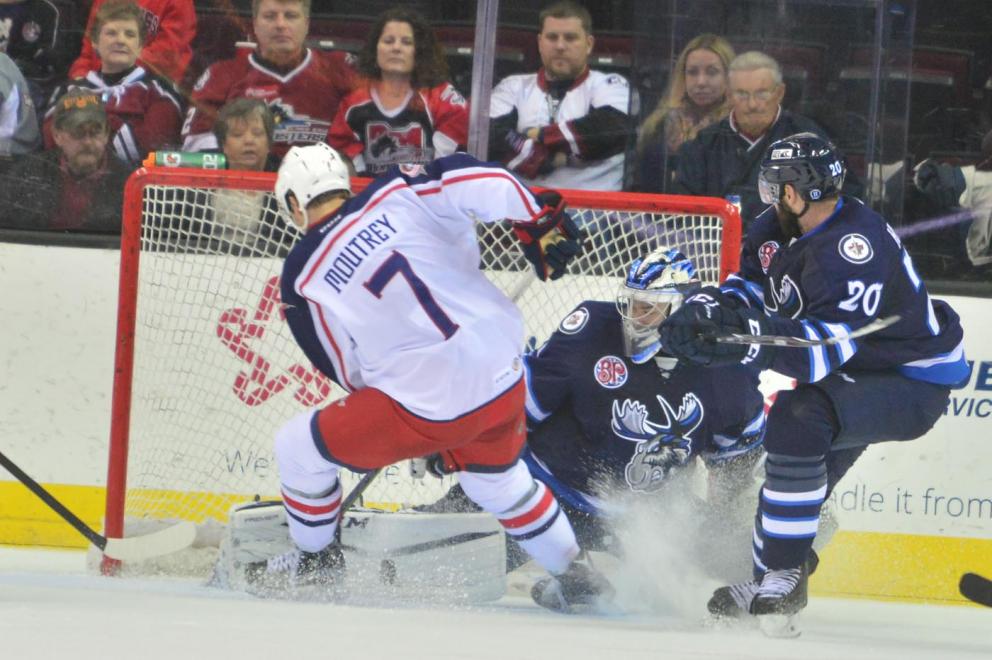 CLEVELAND – The Monsters were back in the all too familiar CLE Blue Jacket affiliate jerseys as they took on the Manitoba Moose for the second time in three days.

And after time to reflect on the bitter lost they suffered at the hands of the Monsters this past Wednesday, the Moose would strike first.

Nick Petan of the Moose would score on a garbage deflection goal with a crowded crease that would just sneak underneath a sprawled Joonas Korpisalo less than two minutes into the game.

His fellow Moose JC Lipon, and Jay Harrison would record the assists.

The rough and tough approach to the last game would carry over into this game; with 10:39 left in the first period, both teams would be “warned” for fighting after two had already broken out and penalty minutes were already being allocated to both team on tap.

Apparently the theme when the Monsters play the Moose is physicality…and penalties. The Monsters would rack up 36 penalty minutes by the end of the 1st. The rest of the frame would go scoreless, as the Monsters would be held to 4 shots the entire period. Moose would take the first frame 1-0.

However, the Monsters wasted no time in the 2nd frame. Michael Chaput, for his 6th goal of the season, would clean up a long distance wrister deflection sent in from Jaime Sifers off a face off win thanks to Sonny Milano to tie the game at 1 a piece.

Then the Monster would kick it past 2nd gear and on a power play with 4:28 left in the second period Nick Moutrey would score his first goal of the season for the Monsters thanks to the misplacement of the puck by Manitoba goaltender Eric Comrie. Michael Paliotta, and Alex Broadhusrt would record the assists to help put the Monsters ahead of the Moose 2-1.

With 1:32 left in the 2nd period, Ryan Craig would record his 5th goal of the season by cashing in on a backhand shot from a beautiful pass across the crease by Josh Anderson, after a speedy blue line break away.

Dillon Heatherington along with Anderson would get the assists on the play and give the Monster’s some insurance going into the 3rd period up 3-1. The more shots you take the more likely one is going to hit the back of the net.

As for the 3rd period, the Monsters would continue to rack up the shots and eventually put the Moose away with a long distance slap shot from the blue by Michael Paliotta set up by Daniel Zaar and deflected by Milano for his 4th goal of the season with 10:22 left in the final period to go up 4-1 and keep it there for the Monsters 6th victory in the past 7 games to put the Monsters 11-4-0-2 on the season and improve in what is turning out to be a very competitive central division.

Next, the Monsters take on the Grand Rapids Griffins on the road for their 3rd game in 3 straight nights before they come back home for a two game stint against the Iowa Wild.