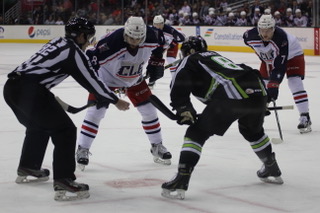 As the Monsters play the final part of their season in the hunt for a playoff spot, I spoke with Elaine Shircliff from SB Nation to break down the season so far and what needs to happen for a playoff berth to be clinched for Cleveland.

EM: The Monsters were on a three-game losing streak heading into Saturday. After what was a rough first frame, the Monsters turned it on for a 6-3 win. What did you take away from that win?

ES: I think the Monsters looked great the last two period and hope it continues into the rest of the home stand. I’m hoping this is a sign the team is finally meshing and have realized it’s do or die time. They were quick on their feet and communicated quite well with one another. Even thought things got a little chippy in the third, the team kept their composure and defended each other rather than angrily retaliating. Having Nick Moutrey back for the last stretch will be nice. I’m trying not to get too excited though but I see a light at the end of the tunnel.

EM: The team did seem to get a boost on Saturday night. One of the boosts came in the form of Sonny Milano, who scored two goals and recorded an assist for his eighth multi-point game of the season. Though he’s produced in bursts, where has this Sonny Milano been all year and why has it taken so long for him to show up consistently?

ES: I have no clue. I feel like Milano thrives in high pressure situations and when he can get fancy on the ice. When Milano plays like his normal self from back in the day that’s when the magic happens. He’s spent his whole life working on fancy tricks when the opportunity arises that’s where he is going to shine the brightest. I also think between injuries and a lot of changes, both coaching and player wise, it’s going to be hard for any sort of consistency to happen on the ice.

EM: It seems as if when Bjorkstrand went up to Columbus is when Milano picked up his play. He had to pick up the slack even more so when Hannikainen was called up for some time. Now, it appears Milano is leading the front line and the point total reflects that.

ES: Good point. Maybe the call-ups were what Milano needed to turn the burners on.  Like I said, he seems to do well in high-pressure situations. Maybe having Bjorkstrand and Hannikainen gone was his alert that things were about to get crazy.

EM: So, let’s talk about the front line. The one thing that is disheartening is the fact that the point-leader for Cleveland, Sonny Milano, is 108th in the AHL’s top scorers list. What seems to be the main problem with the offense this season?

ES: Well, as Coach John Madden said in post game presser after post game presser, there were too many passengers. There weren’t enough people scooping up rebounds or attacking the net. There has also been a lack of patience with players. They want to score so bad they aren’t watching the play unfold before them. I also think injuries to key players like Justin Scott, Nick Moutrey, and Alex Broadhurst hurt the production of the front line. With Scott and Moutrey back in the lineup I think we will see scoring make a comeback.

ES: Do you think losing Aaron Palushaj also made a difference to the team’s front line?

EM: It very well could have. But I think the addition of Zac Dalpe has filled that void and might actually be an upgrade. Dalpe is a guy who can set up the initial shot for the team while also finding the puck at the right time.

ES: Zac Dalpe has definitely filled the role of Palushaj and more. I hope he’s able to stick around for a long time. With the right coach, Dalpe has the potential to do great things.

EM: Let’s talk about Coach Madden. He has definitely had a crazy year and it seems he’s saved the best for last as the team makes the run for the playoffs. What has been your impression of Madden this season?

ES: I could go on for days about how great Coach Madden is for the Blue Jackets organization. He knows his main job is to develop the Monsters for the Blue Jackets. As members of the media, we always know where Madden stands with the team and how they are producing. Which leads me to believe the players more than likely have no questions about what Madden thinks of them. One of the things I like the most about Coach Madden is how he handles the refs. He’ll talk to them if he really needs to but other than that Madden makes sure the players respond to a miss call or bad penalty by playing harder. Like Madden said in post game back in December “Whether you disagree or agree, at the end of the day you’re not going to be able to change it.” As you know, that’s my favorite John Madden quote. Ever since he said it, I’ve been living my life by it.

EM: So, the most important question. The Monsters see a lot of divisional action for the rest of the season. Keys to getting into the Calder Cup Playoffs and do they get into the playoffs?

ES: A fleet of bus drivers need to show up from here on out. The most important thing is winning in regulation against the Iowa Wild and Charlotte Checkers. They sit in the 4th and 5th spot in the division and the Monsters can bump them out. The Monsters need to continue to work on tightening up their power play and getting pucks to the net. Most importantly, they need to play every game like they did during the final two periods of Saturday’s game. Once Marc-Andre Bergeron scored the first goal you knew the energy was changing in favor of the Monsters. Will they get in the playoffs? I’m not sure. What I do know is it’s going to be a heck of a ride until the end of the season. If they get in the playoffs, it’s probably going to come down to the last of the season against Manitoba. Once they get in the playoffs, I believe they will get to the Conference Finals against the San Jose Barracudas.

EM: It will be interesting for sure. One thing I will say is that having nine home games out of the last fourteen contests of the season is a blessing for sure. I truly believe they have to go perfect the rest of the way at home to have a shot.

Where can people find you on social media?
ES: I cover the Cleveland Monsters for SB Nation’s Jackets Cannon (http://JacketsCannon.com ). They also let me write the occasional article about youth and high school hockey. You can find me on Twitter, Instagram, and Snapchat @imaraindancer . Follow along for in game updates. My dms are always open if you have any questions.

A Tiger Woods Comeback Is A Fairy-Tale In A Harsh Reality…And We Need To Stop Supporting It
Monsters Ride Second Period Momentum To Victory, Defeat Chicago 4-1