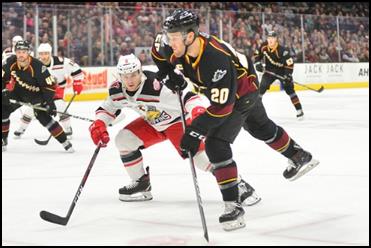 The Cleveland Monsters defeated the Grand Rapids Griffins, 3-2, in overtime on Friday night in front of 11,245 fans at The Q. With the win, the Monsters improve to 17-11-4-0 overall this season and with 38 points, remain alone in third place in the AHL’s North Division standings.

The Griffins opened the scoring in the first period, getting an even-strength tally from Libor Sulak at 4:20 to give Grand Rapids an early 1-0 advantage.

In the middle frame, former Monsters forward Carter Camper potted home an even-strength goal at 8:50 to push the Griffins lead to 2-0.

Cleveland got on the board in the final frame when Justin Scott poked home a loose puck at 3:39 on feeds from Mark Letestu and Nathan Gerbe, to trim the Grand Rapids lead to 2-1. The Monsters tied the game, 2-2, when Letestu tallied a power-play goal at 18:21 of the period thanks to assists from Adam Clendening and Gerbe.

In overtime, Kevin Stenlund smashed home a three-on-three marker on set-ups from Sonny Milano and Tommy Cross to secure the 3-2 home victory.

Next up for the Monsters, it’s a Saturday road rematch versus the Grand Rapids Griffins at the Van Andel Arena at 7:00 pm