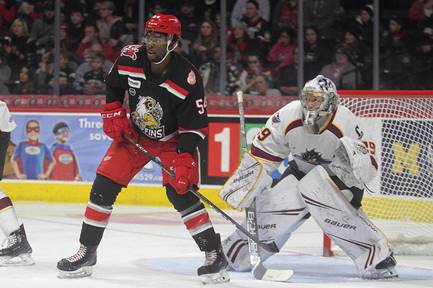 The AHL’s Cleveland Monsters were defeated in a shootuot by the Grand Rapids Griffins on Saturday at Van Andel Arena in Grand Rapids, MI by a final score of 4-3.

With the shootout loss, the Monsters are now to 17-11-4-1 overall this season and with 39 points, remain alone in third place in the AHL’s North Division standings.

After even-strength strikes from Chris Terry at 9:46 and Axel Holmstrom at 10:22 gave the Griffins a 2-0 first period lead, Cleveland’s Sonny Milano potted a five-on-five marker at 18:45 of the opening frame, thanks to assists from Adam Clendening and Mark Letestu, to make it 2-1 heading into the second.

After a scoreless middle stanza, the Monsters tied the game with a Kole Sherwood power-play blast, assisted by Nathan Gerbe and Alex Broadhurst at 2:51 of the third, before Carter Camper pushed the Griffins back in front by a 3-2 margin at 3:46 of the period.

Cleveland’s Doyle Somerby forced overtime with an even-strength finish at 11:16 on feeds from Letestu and Gerbe, but after a scoreless extra session, the Griffins emerged victorious by a 4-3 final score following three shootout stops from goaltender Patrick Rybar and a second-round conversion from Terry.

Monsters goaltender Brad Thiessen stopped 29 of the 32 shots he faced in regulation on Saturday, along with two of three shootout attempts, to fall to 3-1-1 this season while Grand Rapids’ Rybar improved to 8-5-3 following a 33-save performance.

Next up for the Monsters, it’s a Saturday home clash vs. the Utica Comets with full coverage, live from The Q, underway at 1:00 pm.