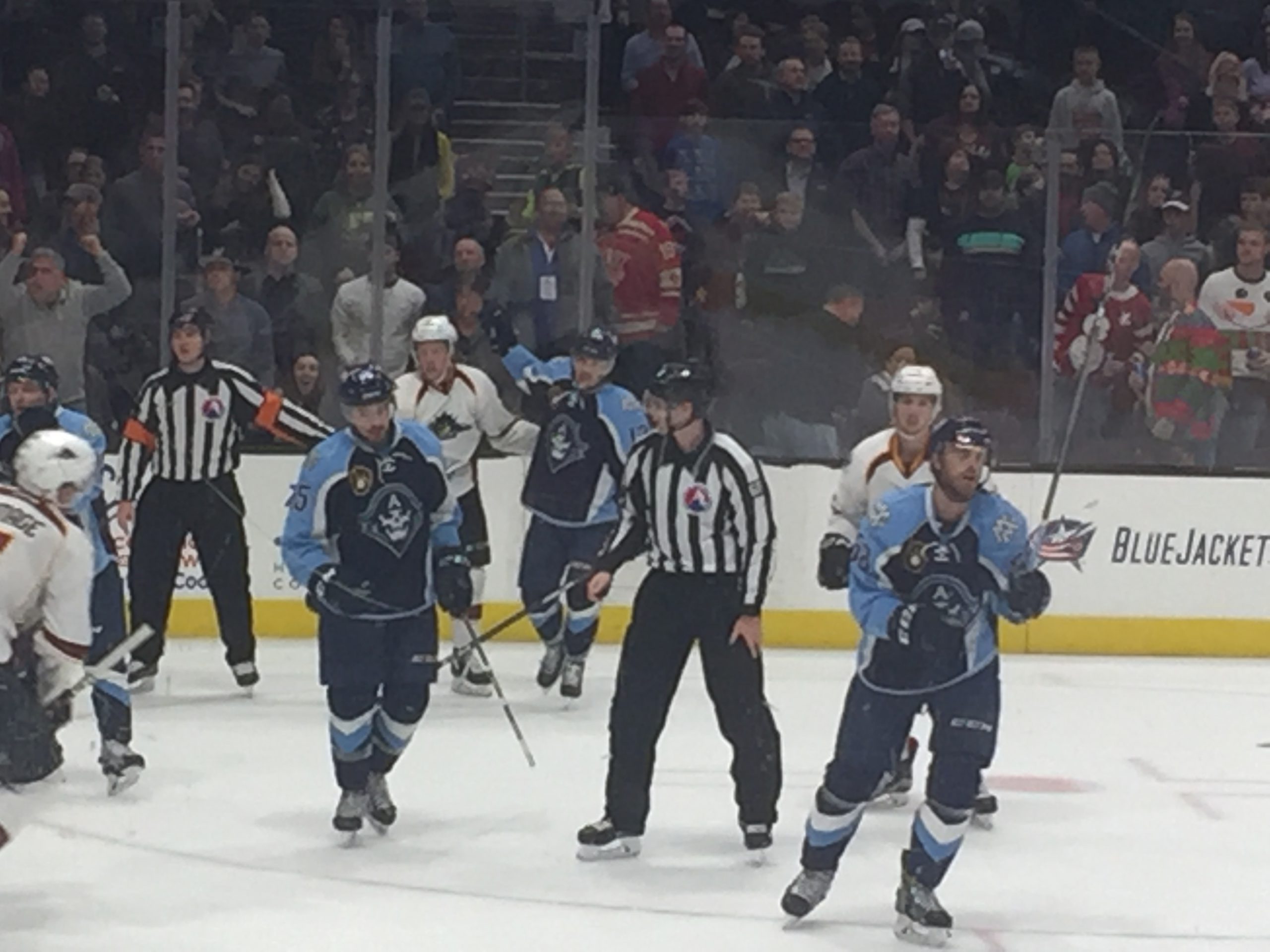 CLEVELAND, Ohio- The holiday season could not have come any faster for John Madden and the Cleveland Monsters following being swept over the weekend by the Milwaukee Admirals. After a penalty-heavy Friday affair that saw the Monsters fall 5-2, Saturday’s contest featured an even crueler finish.

Though you would’ve never guessed that from the start of the game.

In a sight that had everyone in The Q turning their heads left to right, the Monsters delivered a goal just eight seconds into the match along with an exchanging of fists between Cleveland’s Brett Gallant and Milwaukee’s Pierre-Cedric Labrie. As Gallant and Labrie dropped their gloves and prepared for a brief war, Hayden Hodgson scurried to the deflected puck and went high on Milwaukee goaltender Anders Lindback for the top-shelf marker. The goal was set up by a faceoff won by Justin Scott, who sent it to Dean Kukan. Kukan’s tipped pass into the offensive zone benefited the Monsters like no one could have guessed. Immediately following the goal, Gallant and Labrie aired their grievances with one another with a physical altercation.

Trevor Smith’s fifth marker of the season got the Admirals on the board after he caught Cleveland goaltender Ivan Kubalkov out of position on a play where the net-minder exited his net to field the puck. In doing so, the look that Smith earned gave him easy pickings with the goal coming at the 7:13 mark. From there, things got even more out of hand.

Nick Moutrey was sent to the sin bin at the 12:08 mark of the first period after putting an opponent in a headlock. With just four seconds left on the penalty kill, Cleveland once again allowed Milwaukee to strike. This time, the opposition played a pickup game of “Around The World” and proceeded to sling the puck around the ice a couple of rotations before Anthony Richard found a shot he liked and buried the puck for the equalizer at the 14:04 mark of the opening frame.

The two teams went into the break with Milwaukee leading 2-1.

If the game could’ve been a forty-minute special, all of Cleveland would have been elated.

Midway through a hectic middle stanza, Milwaukee’s Emil Pettersson skated to the sin bin for slashing and set up another Cleveland power-play. This time the Monsters capitalized on the opportunity, as Dean Kukan fired a one-timer from Carter Camper to even the score at the 9:47 mark. Cleveland made good on another power-play in the second, this time beating the clock. Sonny Milano chased down a free puck and took a chance at Lindback, who defended it successfully. Milano regained possession and found a cutting John Ramage at the high-slot with eight seconds left in the period to get the good guys back in front. The Monsters went into the locker room with a 3-2 lead.

The number of good looks was minimized in the third and Milwaukee was once again on a twenty-minute mission it appeared. Frederick Allard tied the game up at the 1:56 mark of the period and there was no turning back from there.

Perhaps what took the life out of Cleveland was an unsuccessful faceoff, as it led to Milwaukee once again reclaiming the lead. Trevor Smith won the faceoff inside the Monsters’ defensive zone and immediately dumped it back to Bobby Butler, who potted his eleventh goal of the campaign. Kubalkov had absolutely no idea where the puck was as it zipped past his right shoulder at the 11:54 mark of the third. Trevor Murphy iced the game with his third marker of the season at the 17:14 mark and for the second night in a row, Cleveland fell victim to a strong Milwaukee finish, 5-3.

“We’re generating chances, that’s all I can say,” Madden told reporters after Saturday’s loss. “It just seems every time we have a breakdown it ends up in our net. When you have that feeling that you can’t make a mistake, it’s hard to play hockey.”

The Monsters fall to 9-14-3-2 on the 2017 campaign. Cleveland will resume hockey on the 29th of December after the Christmas break with their first meeting of the season against the Grand Rapids Griffins, the defending Calder Cup Champions.