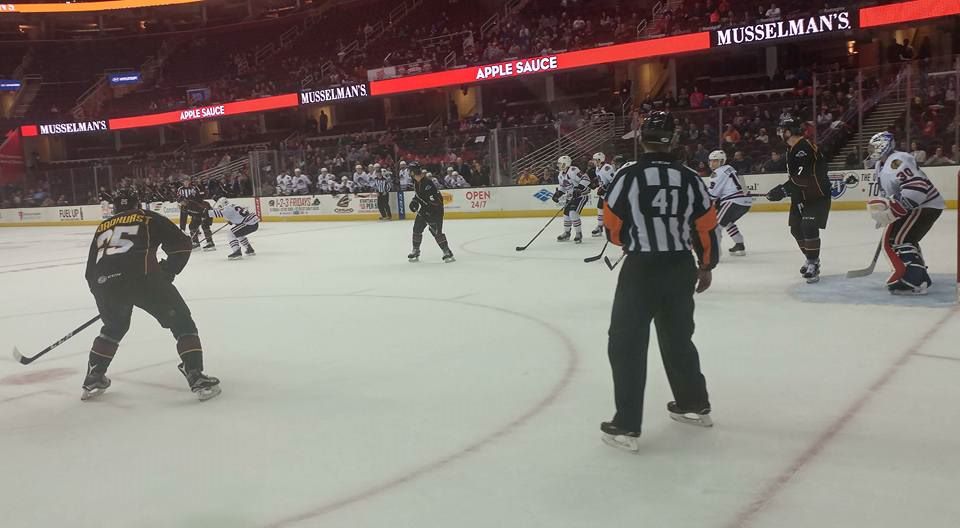 CLEVELAND, Ohio- The Cleveland Monsters returned home to the Quicken Loans Arena for the first time in 2017 Wednesday, as they took on the Rockford IceHogs. The Monsters were in fourth place in the Central Division going into the game, as the IceHogs sat in eighth place. Cleveland would lose to Rockford in a defensive battle, 1-0.

In a first period that featured twenty total shots and one power play, both teams were super aggressive in setting up shots. Rockford was able to take a 1-0 lead after Evan Mosey scored just three minutes into the game. After the Mosey goal, Anton Forsberg was able to settle down and finish with a ten save frame. Cleveland would trail on the scoreboard but could be happy with the way their plays were developing. The Monsters were able to move efficiently into the Rockford defensive zone when they found the opportunity. Only down by one, Cleveland would just need to one of their offensive strikes to find the back of the net.

The second period was very defensive-minded, as the two teams killed four penalties combined. The Monsters continued to set up excellent looks but failed to get the puck in the net, with a couple of shots deflecting off the goal pipes. Cleveland was held to five shots on goal while Rockford exploded for fourteen shots. The Monsters were still looking for the equalizer going into the third period, as the lone goal by Mosey still stood as the difference.

The third period provided the most opportunity for Cleveland with the twelve shots taken on goal. Alas, the Monsters could not find the net and would fall in a tough 1-0 loss.

Cleveland falls to 17-15-1-3 and will play Rockford again on Friday.