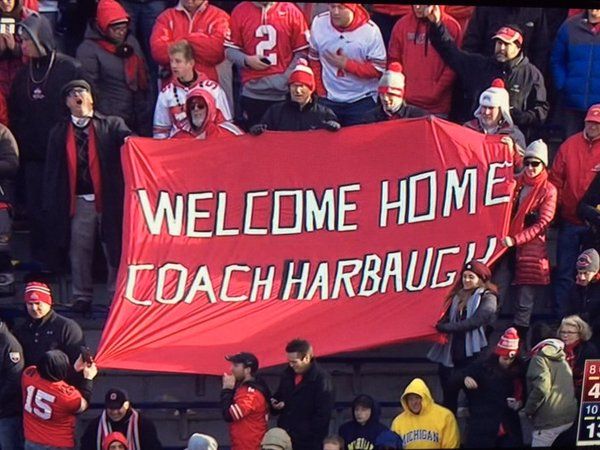 Another twitter exchange other than that between the Indians and Sports Illustrated took place today, this time between two for real rivals – that being Michigan and Ohio State.

Buckeyes AD Gene Smith was asked about Michigan’s decision to hold their practices in Florida. With the Wolverines still looking like a team that is in transition, Smith couldn’t help but take a shot at them with the following quote in the tweet below from the always entertaining Ben Axelrod.

Ohio State AD Gene Smith on holding spring practice in Florida: “If we were jump starting our program, I’d probably try to do that too.”

Well, as you can imagine, if there’s one person that is not going to take well to that, it’s Michigan head coach Jim Harbaugh, who went all the way back to the Ohio State tattoo incident which ended up costing the Buckeyes back in 2011.

That incident came to light after several Buckeyes received special benefits, some of which were tattoos, just for being members of the team.

Here’s the burn back from Harbaugh:

Good to see Director Smith being relevant again after the tattoo fiasco. Welcome back!

So while the Buckeyes own a 1-0 mark against Harbaugh after their 42-13 beat down back on November 28th, the Michigan coach has to get some props for winning this twitter battle.

UPDATE 10:16pm – Ohio State RB Ezekiel Elliott is getting in on the action, taking a shot at Harbaugh. 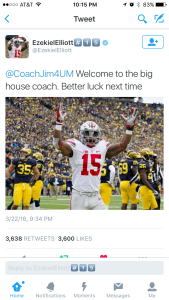 Ohio State Tops Akron 72-63 in Overtime to Advance to the Sweet 16 in the NIT
DRAFT: Which Buckeyes Will Dominate Night 1 Of The NFL Draft?