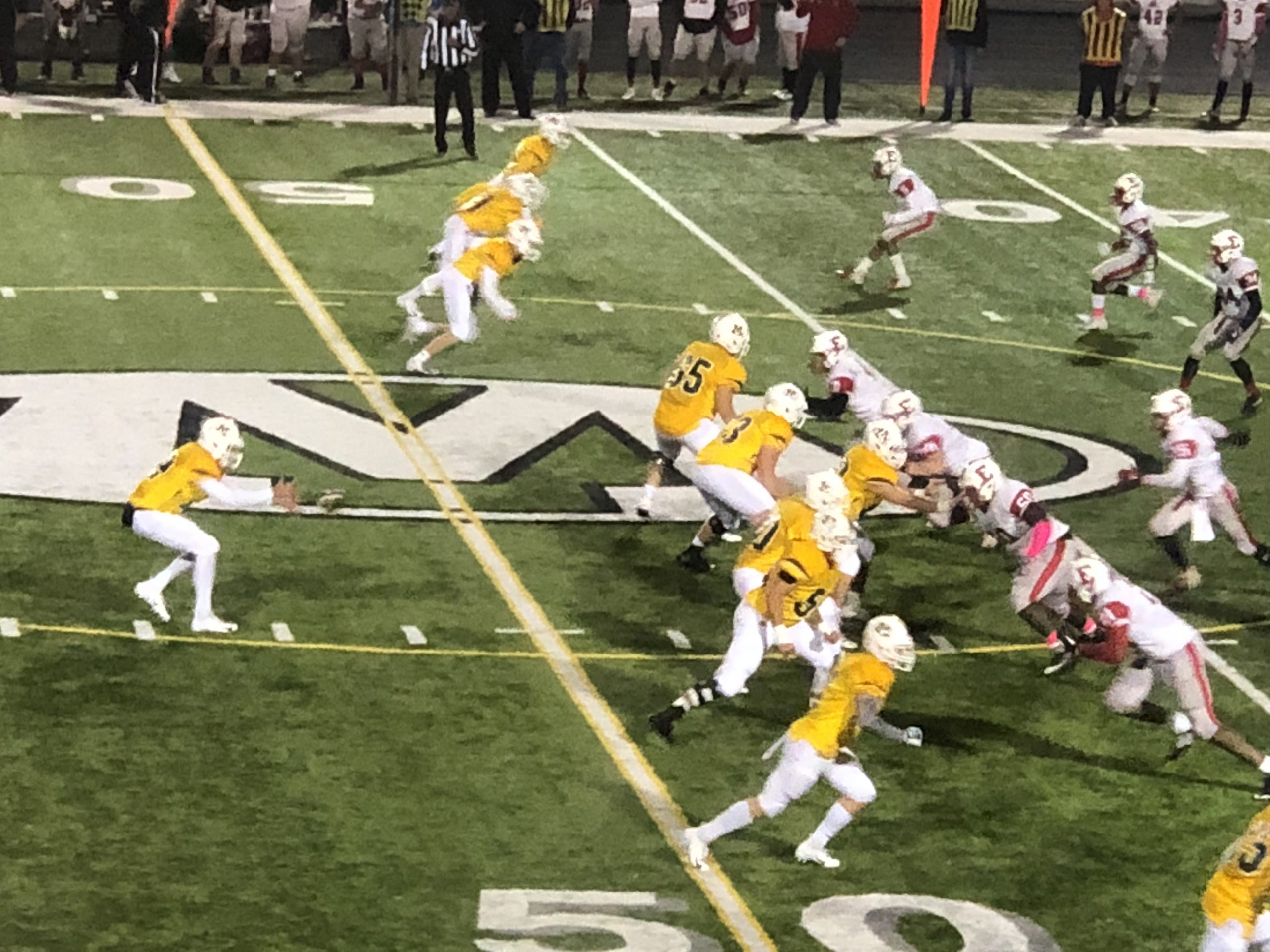 MEDINA, OHIO – It’s been a tough season for the Medina Bees after they won their first two games over Cleveland Heights and Highland by a combined score of 67-27, but Friday night they got just the opponent they needed in the Elyria Pioneers.

The Pioneers, who had yet to win a game in 2018, were no match for the Battling Bees, as led by senior quarterback Ryan Fischer the Bees piled up yards through the air enroute to an easy 51-7 win.

Fischer threw for 267 yards on 21-of-37 passing in the Bees wild ‘run and shoot’ style offense which never saw them even try to establish a run game.

He ended the night with four touchdown passes to four different wide outs with one interception. Backup Ryan Gillespie came in and led one scoring drive going 6-of-10 with 55 yards and a score to put the finishing touches on the win.

The Pioneers had a lot of trouble holding on to the football, dropping a number of passes, and also quarterback Daylan Sharlow put on a gutsy effort but was no match for the Bees defense.

Sharlow went 15-of-31 throwing for 130 yards in a steady rain, throwing four interceptions including one in the end zone on a sack strip that was caught by Bees junior defensive linemen Noah Dunn for a score to make it 30-0 in the second quarter.

The Pioneers only score came after that, as Sharlow and the Elyria offense got the ball deep in Bees territory after a turnover, and finally on a fourth down play converted as Jermele Nolen pulled in a 17-yard score to make it 30-7.

Midway through the third quarter the Bees put the game out of reach to push the lead to 30 with a running clock, as Kaedin Andrasik caught a 16-yard pass from Fischer to make it 37-7.

The fourth quarter saw Matt Adams catch a 5-yard score from Gillespie and Lavelle Hull pulled in an interception and returned it 45 yards for the final score of the night to make it 51-7.

Medina racked up 353 yards of offense, with the pass game accounting for 330 of those yards. Andrasik pulled in five catches for 84 yards with a score.

Nolen led Elyria with eight catches for 64 yards and a score in the losing effort, as the Pioneers final two games to try and get a win will not be easy, as they will play at home for Strongsville and at Mentor in the last two weeks of 2018.

Fischer was the biggest and most effective weapon Friday night for the Medina Bees offense, throwing for 267 yards with four score, hitting on 21-of-37 passes with one pick.

He ran a quick and impressive game for the Bees, as they never had a running back with him as he threw out of an empty set all evening in rainy and cold conditions.

He threw scores to four different Bees, and did a good job looking off covered receivers and throwing the ball to the open pass catcher all night.

The senior QB left the game with the Bees firmly in control leading 37-7 in the third quarter.