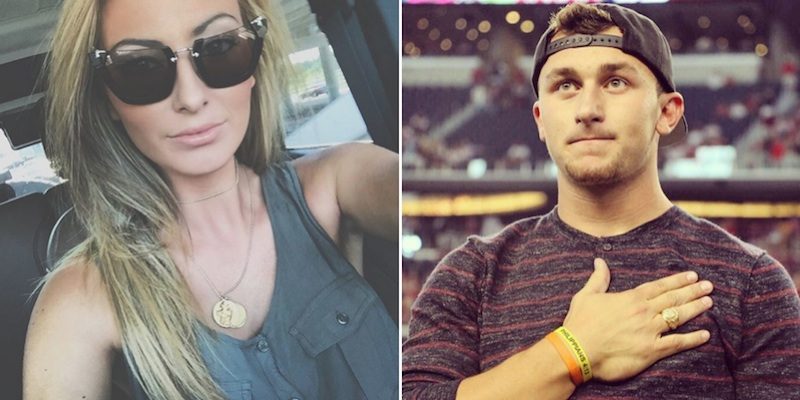 WFAA 8 ABC in Dallas has come out with another bombshell in the latest incident regarding Browns (soon to be ex-Browns) quarterback Johnny Manziel.

The station had an exclusive with Colleen Crowley, who is now described as an ‘ex-girlfriend’ in the piece, says that Manziel threatened to kill her as well as himself after he allegedly forced her into a car ‘by the hair.’

The story states that Crowley is ‘afraid for her safety’ and now has ‘drafted an order of protection.’ The two met up in Dallas on Friday at a hotel, where they argued over another girl, and then things got heated.

Here’s the story on everything that took place. The Browns have since released a statement basically saying in so many words that Manziel is going to be released in March.

DALLAS – The ex-girlfriend of NFL quarterback Johnny Manziel told police that the Heisman Trophy winner told her “shut up or I’ll kill us both” after forcing her into a car, hitting her and dragging her by the hair.

News 8 today learned harrowing details of last week’s alleged assault of Colleen Crowley by Manziel, who is currently on the Cleveland Browns roster but is not expected to return next season.

Crowley has told authorities that, according to sources, she is afraid for her safety and has drafted an order of protection to be presented to a Tarrant County district court judge.

Crowley and Manziel dated for two years and lived together for four months before breaking up in December, sources said.

Sources say in her affidavit, Crowley outlines the details of an alleged assault that she said began in Manziel’s hotel room in Dallas in the early morning hours of Saturday, Jan. 30.

Sources say on Friday night, Crowley and three friends started the evening off at Victor Tangos, a swanky restaurant in the Knox-Henderson neighborhood in Dallas.

Crowley and friends bar-hopped for a few hours before she met Manziel in his room at Hotel ZaZa in Uptown Dallas.

Sources say while in his hotel room, the two of them argued over another girl. Crowley told police she tried to leave the room, but that Manziel wouldn’t let her.

Crowley told police Manziel “restrained” in some manner and “led” her down a back stairway to the valet area.

“I was crying and begged the valet, ‘Please don’t let him take me. I’m scared for my life!'” she told police. The valet reportedly told her, “I don’t know what to do” and let Manziel leave with her.

Sources say Manziel then drove her about a half mile to her car which was parked near the Concrete Cowboy bar off Cedar Springs Road. She claims she jumped out of the car and tried to hide from Manziel but he found her in some nearby bushes.

“He grabbed me by my hair and threw me back into the car and got back in himself,” she reported told police. “He hit me with his open hand on my left ear for jumping out of the car. I realized immediately that I could not hear out of that ear, and I still cannot today, two days later.”

Crowley then reportedly hit Manziel several times hoping to get out of the car, but, she told police, Manziel “threw me off of him” and she hit her head on the car window. She told police he would not give her her phone.

Sources say Manziel then got on Interstate 30 and began driving to her apartment in Fort Worth. While en route, she claims, she yelled at him, “I hate you!” He allegedly replied that “he was going to drop me off, take my car and go kill himself,” sources said.

She says she thought he was on drugs or maybe having a psychotic break. She told police she then began telling him she loved him.

She says at that time Manziel “started laughing” and then reportedly yelled at her to “shut up or I’ll kill us both.”

She says they finally made it to her Fort Worth Apartment where the argument continued.

Crowley claims Manziel became angry, smashed her phone. He then went outside and started “pacing,” she told police. While she was alone, she tried to use her computer to contact her parents through Apple’s FaceTime video chat system.

She said Manziel came back into the apartment, checked her computer and realized she had tried to contact her parents.

“I was in my kitchen so out of fear for my life, I pulled a knife out of my knife block and advanced toward him,” Crowley told police.

“He ran out of the apartment,” she said. When she saw him in the parking lot, she said she banged on a neighbor’s door and screamed for help. Manziel fled on foot, she told police.

Scarlet and Gray In Super Bowl 50 : 5 Former-Buckeyes Playing in Sunday’s Big Game
Manziel Answers Back to Ex-Girlfriend’s Claim He Hit Her – “It Didn’t Happen”