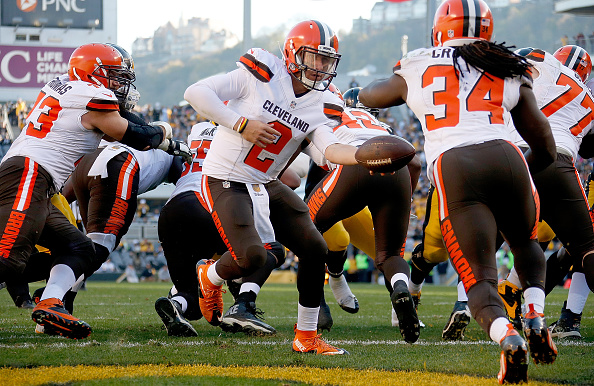 Browns now starting quarterback Johnny Manziel is ready to learn from his mistakes, and says he’s ready to get back on the field and put the last few weeks behind him.

Speaking to the media on Wednesday, Manziel says he’s ready to take back the role that he was handed to going into the bye week, which he then lost for going out and partying in Columbus, OH and Austin Texas.

“Obviously, after the past couple weeks, I was forced to learn a hard lesson, and I had to learn it the hard way,” Manziel said

“I am lucky to be back in the position that I am in and being the starter again. I am definitely not taking it lightly, that’s for sure.”

The Browns are hoping that Manziel will learn from his mistake, and will be able to focus back on being a leader on the Browns as well as their starter for the last few weeks of what’s been a disaster of a season.

The second-year quarterback said that he knows his off the field conduct has been a big reason for while he’s not been the starter longer for the Browns, and that unless he shapes up, his NFL career may be very short lived.

“There is a way to conduct yourself that 31 other guys in the league do each and every week,” Manziel said.

“You have to follow that example and realize that this is a very prestigious situation that I am in being a starting quarterback in the NFL. I have to take pride in that and act accordingly.”

The Browns and coach Mike Pettine have complemented Manziel on how he’s handled himself for a majority of the season, but at the same time the latest incident in which he lost his starting job is alarming.

Since he’s joined the Browns there’s been a number of incidents, and also a stint in rehab. Time is running out for him to prove himself, and with an offseason of changes almost for sure coming, this could be the last shot for ‘Johnny Football’ in Cleveland.

“Are there obviously times where I need to better, and like I said, act the way I want to each and every day, every second of every day? Sure, but from where I was last year to where I am today, I still am extremely proud of where I am.”

Staying out of trouble and trying to get better are two of the biggest things on the docket for the last four weeks for Manziel.

He talks the talk, now is the time for the young QB to finally start to walk the walk.