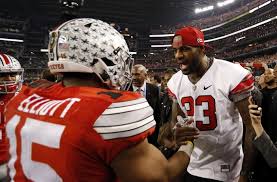 After the Cavs play the Dallas Mavericks Friday night, LeBron James and his teammates will be attending the Ohio State-Michigan game at the Horseshoe on Saturday afternoon.

LeBron and Nike also have provided Ohio State players with custom cleats heading into the game and the Buckeyes will have the option to wear them during the game.

Michigan has a partnership with the Jordan brand for their apparel, meaning LeBron and Jordan will once again go toe-to-toe for who is the greatest.

LeBron has a long history of rooting for the Buckeyes and is a friend of head coach Urban Meyer.

It was unclear which teammates would be in attendance at the game when the news was first announced, but Tyronn Lue confirmed the entire team will head down to Columbus.

Throughout the game, don’t be surprised if LeBron and the Cavs are shown on the telecast, supporting the Scarlet and Grey.