LeBron Duels With Durant and Westbrook; Cavs Hold Off Thunder 104-100 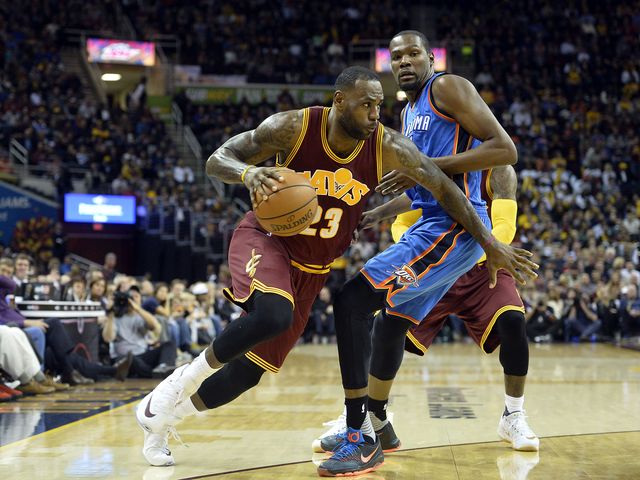 The Cleveland Cavaliers hosted the Oklahoma City Thunder Thursday night at Quicken Loans Arena, and some of the NBA’s best talent was in the building, as the Cavs held off the Thunder 104-100, in a game that came down to the final seconds.

It was a duel of superstars, LeBron James and Kevin Durant, and it started out fittingly with each one knocking down a three to put their teams on the board in the first two minutes.

It felt like a playoff atmosphere inside Quicken Loans Arena, as Durant put on a show in the first quarter with 14 points, including pair of threes and a reverse layup reminiscent of Julius Erving.

LeBron knocked down two long-distance jumpers early in the game, and with less than thirty seconds left in the first quarter, drove through two defenders to make an explosive layup and draw a foul. He would sink the free throw to convert it into a three-point play and tie the game at 26, but Durant responded with a step back jumper with two seconds left on the clock, and the Thunder would lead after one, 28-26.

Oklahoma City’s other star, Russell Westbrook displayed his skills, as well, scoring 12 points in the first half, but found himself in early foul trouble with three fouls in the half.

Matthew Dellavedova had a great first half, shooting three-for-four from beyond the arc, as he and J.R. Smith each scored 11 points by halftime, helping the Cavs erase a 12-point deficit to lead 46-40 with 2:34 to play in the second quarter.

The Thunder would respond in the final two minutes of the second quarter, going on a 7-0 run to take back the lead, and enter halftime on top 47-46.

Westbrook came out of the gate aggressively to start the second half, leading Oklahoma City on a 19-10 run in the first five minutes of the third quarter.

Serge Ibaka hit his second three-pointer of the night to make it 69-58, but Richard Jefferson responded with a three of his own to make it an eight-point game with just over five minutes left in the third quarter.

Ibaka would answer back with another jumper to make it 71-61.

LeBron kept the Cavs close with another three-point play on a driving layup, in which he was fouled and would hit the free throw, as James scored nine points in the quarter.

The next possession, LeBron drove to the hoop and dished out a beautiful, behind the back pass to Tristan Thompson, who was cutting to the basket and threw it down to make it 71-66.

After Durant split a pair of free throws, Dellavedova found Thompson for an alley-oop with 3:15 left in the third quarter, which made it a four-point game.

Oklahoma City continued to get points at the free throw line, late in the quarter, as the the Thunder went 11-for-12 from the charity stripe in the third.

Former Cavalier, Dion Waiters, missed a pair of wide open threes with less than a minute left in the quarter, and LeBron found Jefferson with a full court pass leading to a two-handed reverse dunk, which would make it 78-74 in favor of Oklahoma City heading into the fourth quarter.

Waiters was greeted with a chorus of “boo’s” earlier in the game when he first stepped on the floor.

Kevin Love made his biggest basket of the night with 11:14 to play in the fourth quarter, leaning into contact and drawing a foul, while hitting a difficult three-pointer. He would convert the free throw to make it a four-point play and tie the game.

The next possession, Love hauled in a rebound and threw a full court pass to LeBron, who laid it up while drawing contact, and converted a three-point play to put the Cavs ahead 81-78.

LeBron would grab a loose ball the next possession and throw an alley-oop pass to Jefferson to make it a five-point game, as the Cavaliers achieved a nine-point turnaround in approximately one minute. It was LeBron’s ninth assist of the night.

Dellavedova fed Thompson for another alley-oop with 8:40 to play, then Jared Cunningham came up with a steal, leading to a fast break, in which LeBron drew a double-team, and found Cunningham for a wide open three, to put the Cavs up 90-80, their largest lead of the night up to that point.

Not long after, LeBron muscled his way for another “and-one,” and would hit the free throw to put the Cavs up 11 with 7:26 to play.

Every time the Thunder would try to cut into the deficit, the Cavs would answer, as LeBron knocked down a three and Thompson slammed home another dunk to keep the Cavs ahead 97-87 with 5:34 to play.

Westbrook, Ibaka and Durant would not go quietly, however, bringing the Thunder back within five with two minutes to play.

Love knocked down a corner three with 1:44 remaining to make it 103-95, but Westbrook would hit a three of his own to get it back to a five-point game.

Thompson tried to get a dunk off on the other end, but did not release the ball in time and was called for a shot clock violation, giving the Thunder the ball with 1:10 to play.

Westbrook made a heads-up play on the next possession, as the ball was heading out of bounds, but the point guard was able to slap it off of Love’s leg out of bounds, so the Thunder would maintain possession with 58 seconds.

He made that extra possession count, knocking down a clutch jumper to make it 103-100, and LeBron would miss a runner on the other end, giving the Thunder the ball with 22 seconds left.

Durant attempted a game-tying three and missed, but the scramble for the rebound bounced off of James and out of bounds, which gave the Thunder the ball with 6.5 seconds left.

Westbrook missed a three off the front of the rim, James came up with the rebound, and was intentionally fouled with 0.7 seconds left.

LeBron would split the pair of free throws and the Cavs held on to win 104-100.

LeBron finished with 33 points, nine rebounds, and a game-high 11 assists on the night.

The Cavs had five players in double-figures scoring other than LeBron, as Love, Smith, Dellavedova, Jefferson, and Thompson all had productive nights.

Dellavedova finished with 11 points and ten assists, and Thompson ended up with 14 points and a game-high 15 rebounds.

The Cavs improve to 17-7 on the seaaon and win their fourth straight, and are off until Sunday afternoon against the Philadelphia 76ers.