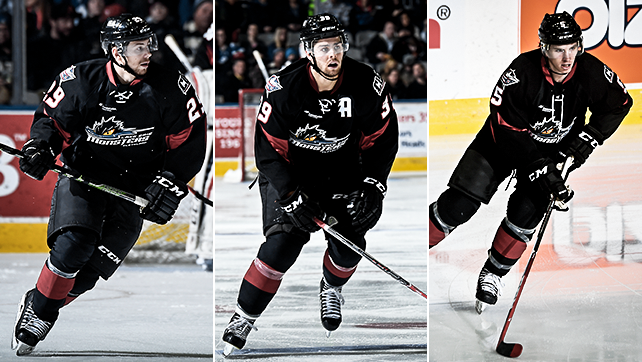 Prior to a Friday home clash vs. the Manitoba Moose, Lake Erie Monsters forwards Oliver Bjorkstrand and Michael Chaput, and defenseman John Ramage, were recalled by the NHL’s Columbus Blue Jackets, the Monsters announced Wednesday. Bjorkstrand and Ramage received their first NHL call-ups of the season on Wednesday, while Chaput was recalled by the Blue Jackets for the third time this year.

A 6’0”, 176 lb. right-handed native of Herning, Denmark, Bjorkstrand, 20, was selected by Columbus in the third round of the 2013 NHL Entry Draft (89th overall) and contributed 15 goals, 25 points and eight penalty minutes in 46 appearances for the Monsters this season in his first professional campaign. In three WHL seasons from 2012 to 2015, Bjorkstrand supplied 144 goals, 290 points, 81 penalty minutes and a +142 rating in 193 appearances for the Portland Winterhawks.

Ramage, a 6’0”, 201 lb. right-handed blue-liner and native of Mississauga, ON, is currently in the midst of his third professional season and signed a two-year, two-way AHL/NHL contract extension with the Blue Jackets on March 1st. In 55 appearances for the Monsters this season, Ramage, 25, notched six goals, 18 points and 51 penalty minutes, and in 162 career AHL games played, spanning parts of three seasons from 2013 to 2016 with the Abbotsford Heat, Adirondack Flames and Lake Erie, Ramage accumulated nine goals, 34 points and 178 penalty minutes.

A fourth-round selection by the Calgary Flames in the 2010 NHL Draft (103rd overall), Ramage has one NHL appearance to his credit (for Calgary during the 2014-15 season), and skated in six regular-season games and 20 playoff contests for the ECHL’s Alaska Aces during the 2013-14 campaign. Prior to his professional career, Ramage supplied 14 goals, 53 points, 237 penalty minutes and a +28 rating in 157 NCAA appearances for the University of Wisconsin spanning four seasons from 2009 to 2013, the final two of which he served as the Badgers’ team captain.