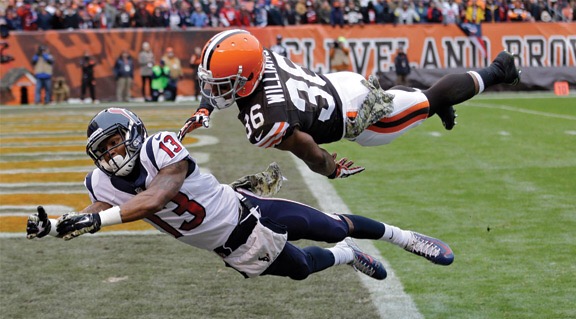 Former Cleveland Browns cornerback K’Waun Williams filed a grievance last week against the team for his upcoming ankle surgery and his entire 2016 salary of $600,000. The hearing is set to take place in the spring.

Williams went to a independent foot doctor recently and the doctor confirmed that he would need surgery and it would likely take 12 weeks to recover which means his season in the NFL is over.

The Browns waived Williams back in August while he was serving a suspension for refusing to play in Green Bay. The Browns say he told them he didn’t want to play, and retired instead. He was soon picked up off waivers by the Chicago Bears.

Williams injured the ankle during organized team activities in the spring and aggravated it during the Orange and Brown scrimmage. Williams felt compelled to either play or retire in Green Bay.

After he refused to play that day, the Browns suspended Williams two weeks and fined him a game check that he would later appeal.

The Browns have yet to comment on the situation.