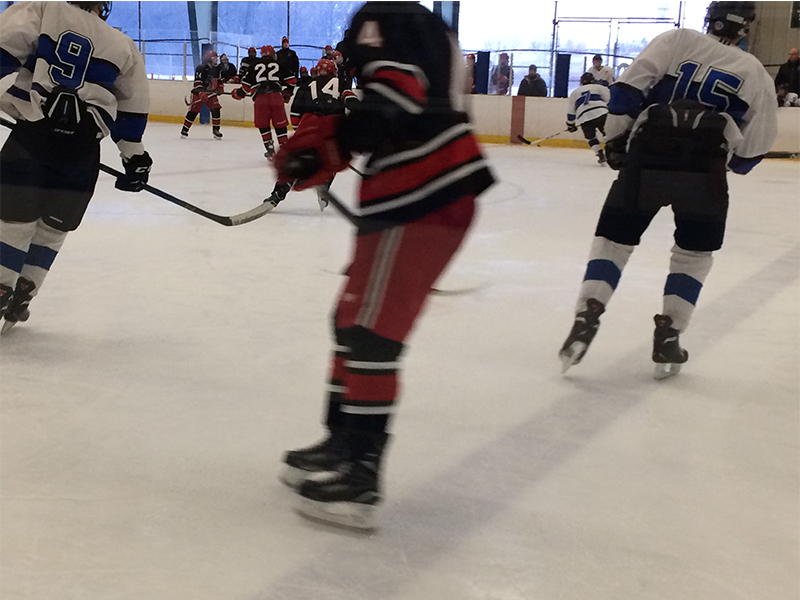 ELYRIA, Ohio – After beating Solon 4-3 last night; Midview (4-0-0) is back in action tonight to take on Kent Roosevelt (0-3-1) at the Elyria North Rec. Kent Roosevelt tied North Olmsted last night 3-3. This is another red division south matchup in the GCHSHL.

At the beginning of the game both teams were flying around so you knew from the start that fatigue was not going to be a factor even though they played last night. The play in the first period was very physical.

Nick Krestan was able to put Kent on the board first, at the 8:36 mark in the first period. Hunter Hillebrecht and TJ Harrod assisted him on the play. During the first period Kent committed two penalties.

Kent’s first goal of the period was unassisted and tallied by Chris Heim at the 4:03 mark in the second period, giving Kent a 2-0 lead.

In the third period, Midview stuck with Zach Seel as their goal tender. Kent’s Bailey Collier committed a five-minute major penalty for an open ice check from behind and Midview’s Jake Behler was able to score their only goal of the game as a result of it.

Midview pulled their goalie three times in the third period; in hopes they could score against a short-handed Kent team. Kent’s defense stood up against Midview’s constant pressure and held on for the 3-1 victory.

The third period was no different than the first two periods of the game because the physical play continued by Kent, which was the driving force that helped them defeat Midview, and hand them their first loss of the season. Kent also picked up their first win of the season improving to 1-3-1. Midview falls to 4-1-0 on the season.

CSU Loses Another League Game Down The Stretch, 83-75
3 Defensive Players The Browns Should Sign In Free Agency After The Gregg Williams Hire