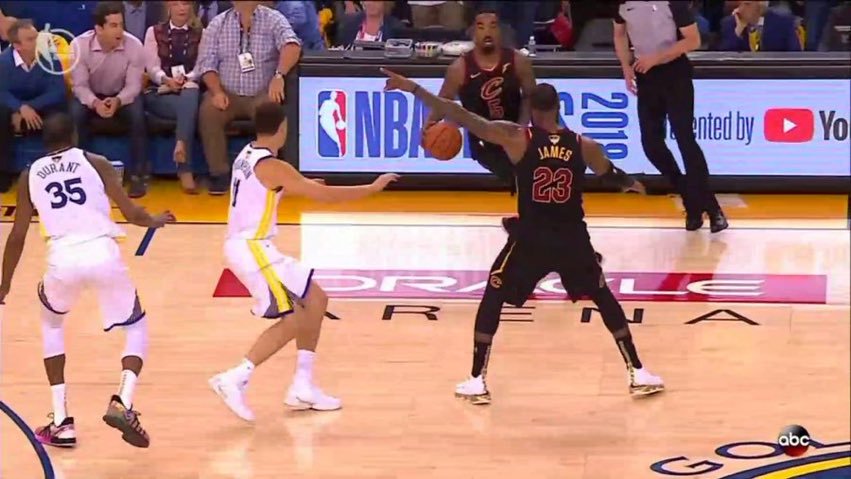 A wild one opened up the 2018 NBA Finals, as the Golden State Warriors hung on for an overtime win to top the Cleveland Cavaliers, 124-114. LeBron James finished with 50 points, a Finals-high for him. Steph Curry finished with 29 points for Golden State, one of three Warriors that finished with twenty-points.

Controversy struck late, as JR Smith recovered a late rebound after George Hill missed the second of two free throws with under five seconds left in the game. Smith ran away from the hoop and a clear look, sending the game into overtime. Smith was seen saying he didn’t know what the score was.

Let’s take a look at the three takeaways from this one.

1. Smith’s Dumbfounding Play– JR Smith may have buried the Cavs’ best chance at winning a ballgame at Oracle Arena with a headscratcher late in the fourth quarter.

As mentioned above, Smith was unaware of the score when he had the opportunity to be Game 1’s hero for Cleveland. Instead, he’s being questioned left and right. Rightfully so, as a loss like this could be a backbreaker.

Smith finished with ten points and six rebounds for Cleveland.

2. LeBron’s Monumental Game- LeBron James dropped 51 points, eight rebounds, and eight assists in the heartbreaking Game 1 loss. James shot 19-of-32 from the floor and helped Cleveland snatch the lead late in the ballgame with some heroics down the stretch. Unfortunately, the loss will be remembered the most.

However, it’s just another monumental moment in the legacy of LeBron. After hitting his Finals-high for points, what does Game 2 have in store?

3. Late Overturned Call Changes Dynamic Of Game- LeBron James seemingly sealed the game when he planted his feet and drew a charge on Kevin Durant. The call on the floor was initially a charge. However, the officials reviewed the call and reversed it to a shooting foul.

That’s one of the main plays that changed the complexion of the game. Down the stretch, the Cavs crumbled. The old ways creeped in and LeBron was left wondering what happened.

VIDEO: Tristan Thompson and Draymond Green go at it in OT
Video: ESPN NBA Countdown: Cavs JR Smith Was ‘Unprofessional’ For His ‘Negligence’