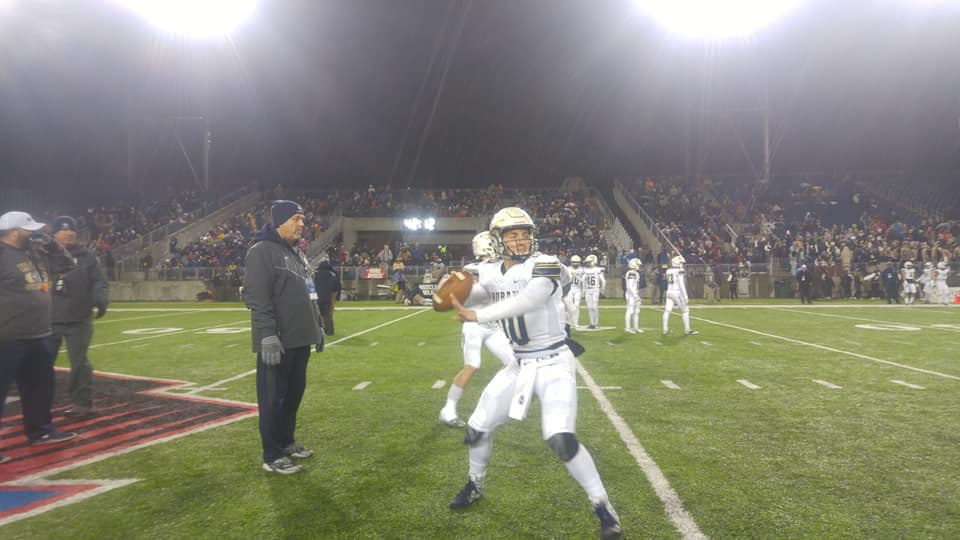 The Archbishop Hoban Knights survived a wild second half Massillon Tiger comeback to capture the Division Two State title game in Canton tonight. It was a hard-fought game filled with emotion as the Knights took down the Tigers 42-28 in front of a packed house at Tom Benson Stadium to secure their fourth consecutive State Championship for head coach Tim Tyrell.

The Archbishop Hoban Knights were once again an offensive machine in every facet they needed to be. Quarterback Shane Hamm led the way passing for 118 yards and two touchdowns. He also ran for 66 yards and two more touchdowns. Hamm was everywhere tonight and for a sophomore, showed the poise of a senior.

Helping Hamm was his two-man wrecking crew in the backfield fueled by Tyris Dickerson and Deamonte Trayanum. The senior Dickerson had a monster night himself, finishing with 211 yards on 28 carries, scoring 1 touchdown on the ground, and also one in the air. He was the workhorse tonight.

Trayanum was every bit as dangerous as the junior rushed for 82 yards on 17 carries. He scored his lone touchdown on the ground, and it was the game clincher. Trayanum is one of the best players in the state, and the entire country will be paying close attention to his senior season next year.

It was well noted that the Tigers were without their star running back Jamir Thomas, but they did their best to move the ball on the ground when they needed to. Zion Phifer got the bulk of the workload as he toted the ball 21 times for 82 yards and 2 touchdowns.

Little used this season, Kyshad Mack also stepped up in the moment, finishing with 69 yards on 6 carries with a touchdown. One could only wonder how different the game may have been with a healthy Thomas.

The Knights opened the game on their own 21 after forcing a crucial turnover on downs after a 60-yard drive by the Tigers stalled out. The Knights wasted no time at all pounding the ball with ease, as they proceeded to march 79 yards on six plays to score. All six plays coming on the ground courtesy of Dickerson and Hamm. They did it only taking 2:55 off the clock.

Following a 3 and out, it was the Knights turn to go back to work, and they sure did! An impressive 2 play, 69-yard drive, taking all of 22 seconds off the clock. This time it was a beautiful 46-yard pitch and catch from Hamm to Mason Tipton. Seconds later Hamm took it the rest of the way on a designed QB sneak with an empty backfield. Hamm raced by diving Tigers on his way to pay dirt to increase the lead to 13-0. The first quarter would end by the same score.

After another Tiger three and out, the Knights took over at the Massillon 39-yard line with a short field to work with. They were forced to a fourth and short after 3 solid stops by the Tigers, the Knights decided to go for it instead of kicking the long field. The gamble paid off as Trayanum rumbled forward for a 11 yard pick up to move the chains. A few plays later it was Hamm making it 20-0 with a goal line sneak.

Just when it looked like it couldn’t get worse for Massillon, it did as Devin Hightower picked off Aiden Longwell and took it back to the Tiger 35-yard line. One play later, Hamm hit a tightly covered Dickerson in the corner of the endzone to put the game “seemingly” out of reach. With 10 minutes still to play in the second quarter, it was 27-0 Hoban.

The Tigers would not go down without a fight however. Longwell took matters into his own hands by launching a 42-yard bomb to Jayden Ballard. The next pass was for 22 yards to Aydrik Ford to put them in scoring position. Phifer would finish it off and get the Tigers on the board with a 1-yard touchdown.

The Knights were unfazed and took their time, but were once again effective scoring. This time a 10 plus play drive, milking the clock down to 55 seconds left in the first half before the red-hot Hamm hit Alabama commit tight end Caden Clark for a 28-yard touchdown to end all doubt at 34-7 by halftime.

Massillon was determined to go down swinging and went for the onside kick to start the second half. They recovered it and began to mount a rally. Longwell connected with Tre’Von Morgan for 25 yards and all of sudden, the Tigers were on the prowl. A few plays later it was Phifer cutting into the lead with a 6-yard touchdown jaunt. An extra point later it was 34-14 and the Tigers had life.

The Tigers would then force a rare Knight punt and continue the comeback hunt. Longwell used a mixture of his legs and arms to get the Tigers down to the Knight 11-yard line. He was assisted by a couple of long Mack runs as well. In the blink of an eye we suddenly had a game, as Mack dove in over the plunging Knight defense, scoring, and cutting it to 34-21 with 56 ticks of the clock remaining in the third quarter.

The Tigers kept the momentum squarely on their side by forcing another Knight turnover on downs. They took the ball over and wasted no time as Longwell connected on a 67-yard launch to Ford to score. The fans went into frenzy as suddenly, it was a 34-28 game with 9:13 remaining.

It appeared like the miracle comeback may actually happen when the Knights were forced to punt yet again at the 6:23 mark of the fourth quarter. However, this time, coach Tyrell called for a fake and they converted it. A few minutes later the Knights would officially end all doubt with a clinching Trayanum 2-yard touchdown. They would then convert the 2-point conversion and extend the lead to 42-28.

The game would end by the same score. Few games live up to the hype this one had coming into it. This game absolutely did and will be seen as an instant classic!