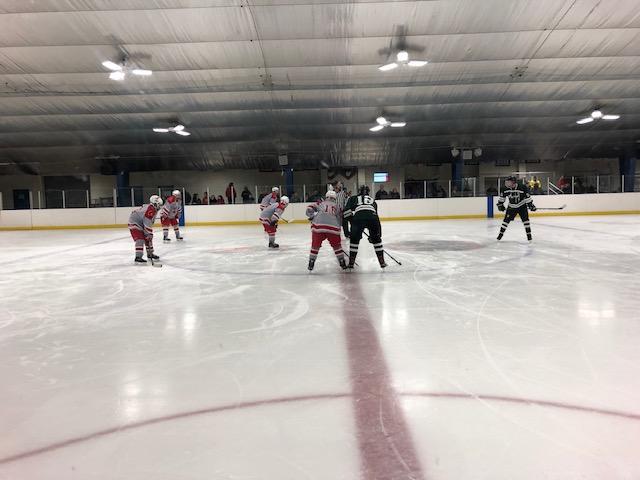 PARMA, OHIO – A few short weeks ago, the Parma Redmen won the Nordonia Holiday Tournament with an 8-1 victory over the Aurora Greenmen. The GCHSHL Blue North division teams met again Tuesday night, this time in league action at Ries Rink.

Parma peppered Aurora goalie Jordan Smith with 24 shots in the first period and struck first when defenseman Robbie Gudin (from Robert Takacs and Ryan Myers) found the net to make it 1-0. Senior forward Matt Piech and Takacs (from Gudin) also scored in period to give the Redmen a three-goal advantage heading into the 2nd period.

The Greenmen answered back on the power play early in the 2nd when Brandon Mackrell was called for a hook. Parma’s penalty kill has been strong this season, but Aurora’s Cameron Mullin was able to capitalize on the man advantage on a feed from Jack McElwee. Aurora was unable to build any momentum, however, as Redmen scoring leader Matt Higginbotham (from Gudin) quickly made it 4-1. Higginbotham and Piech (from Higginbotham and Owen Arthur) tacked on their second goals of the game later in the period to give Parma a five-goal lead that they never relinquished.

Goalie Colin Pinson was strong in net for Parma with 24 saves. The Redmen host their next league game against Mayfield on Sunday, December 23rd.