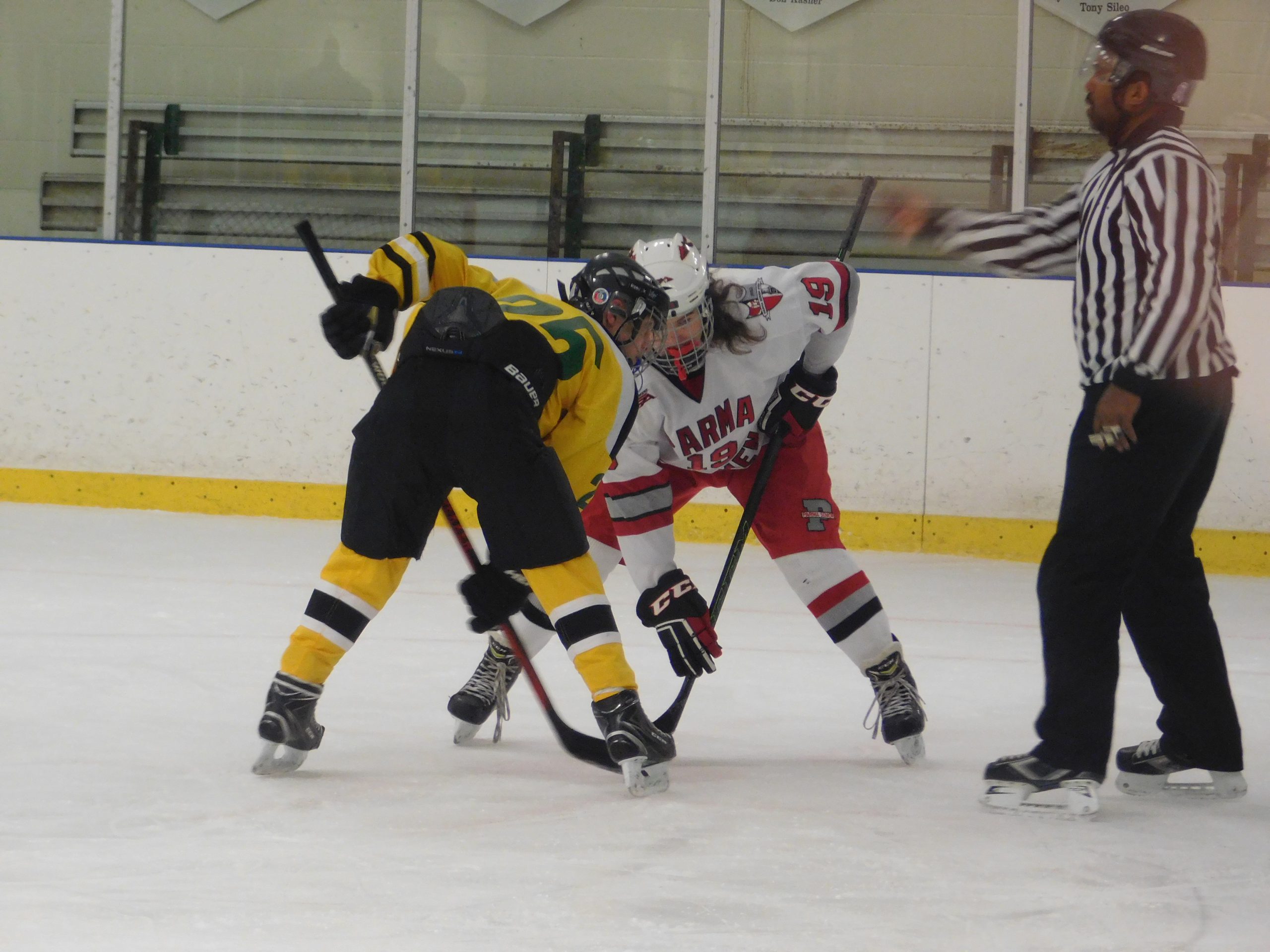 PARMA, OHIO – With the Baron Cup clearly in their vision, the remarkable season for the Amherst Hockey team continued on Tuesday night, grinding out a 5-3 win over the game Parma Redmen in Parma.

The victory puts the Comets at 27-2-0 on the season, and they’ve outscored their opposition 170 to 45 this season, a whopping 5.8 goals averaged per game, allowing an average of 1.5 goals per contest.

The Redmen, who drop to 7-18-0 on the year, gave the Comets a fight and then some, despite being outshot on their home ice 45-8, they sat tied at three with the Comets with 9:39 to play before Amherst scored two goals in 1:35 to put the game away.

Parma in the losing effort got two goals from freshman Robert Takacs. Their senior goalie Ryan Pinson played a solid game in net, as he turned away 40 of 45 shots by the Comets in the loss.

The Comets struck first as they peppered Pinson in the first half of the first period, and struck when Giannuzzi found the net to make it 1-0.

The goal coming with 7:51 to play in the opening period saw the assist go to sophomore forward Jacob Kramer.

Parma came back and tied the game about five minutes later, taking advantage of a power play after Kramer was called for a high stick.

The goal for the Redmen was scored by junior forward Matt Piech, as he put a pretty shot on net that squirted past Amherst goalie Zac Boesel for the goal.

David Basic got credit for the assist for the Redmen to tie up the affair. The two teams skated off at the end of 15 minutes tied at one, with the Comets outshooting Parma 8-3 in the first period.

Parma came right out of the gate to start the second period, and took a quick 2-1 lead just :44 seconds into the period. The goal went to Takacs, giving the Redmen their first lead of the evening.

The Redmen did a nice job of two penalty kills in the second, keeping them ahead with the one goal lead 11 minutes into the second.

The Comets continued to pepper the Redmen with offensive pushes, and finally after dominating in shots on goal scored twice in the final 63 seconds of the period to take a 3-2 lead.

The first goal with 1:03 to play in the second went to Kramer with the assist going to Jacob Fekete to tie the game at two apiece.

The Comets quickly came down the ice and scored with 46.8 to play to take their second lead of the night. The third Amherst goal went to freshmen Nathan Harmych, this time the assist going to Giannuzzi.

Amherst led in shots on goal after two periods 25-5 despite holding just the one goal advantage.

The Redmen again took advantage of a power play after Amherst defender Tyler Waldecki was called for cross-checking with 11:26 to play.

It was again Takacs, tying the game on a nice wrap around to convert the power play goal with 9:39 to play to make it a 3-3 affair.

The Comets quick strike offense took over, as again they put the pressure on Pinson, scoring two goals in 95 seconds to take a 5-3 advantage.

The first goal went to Kramer, with Fekete getting the assist with 8:43 to play to make it a 4-3 game.

They struck again with 7:08 to play, this time it was Giannuzzi on the goal, his second of the game, with Harmych and Kramer on the assists to make it a two-goal game.