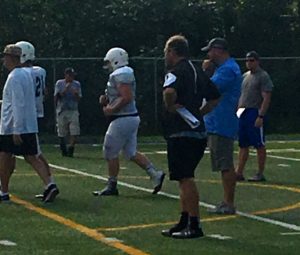 The new Benedictine coaching staff is looking to keep the Bengals as one of the premier programs in Northeast Ohio. Photo by Mike Coutee

Coach Welo has set high expectations, both for himself and for his players.

“We need to win games,” Welo said. “We need to play every game in November and December.

We’re the ‘Home of Champions’ for a reason.

“Yes, I’m a first year head coach – new to everything, and have a bunch of seniors leaving – but that doesn’t change our expectations.”
Benedictine is dealing with the loss of many key players to graduation, including Justin Layne (Michigan State), Warren Saba (Garden City C.C-Kan.), Dontez Rash (Ohio) and TJ Beltavski (Ball State).

“I think it will be hard to replace last years team … the fact is, we did have a lot of talent, but we’re young and growing,” Welo stated. “Our defense has three returning starters, and five on offense returning, but there’s a lot of senior leadership we have lost going into this year.

“Our guys are hungry, competing and don’t want to lose a beat,” he continued. “The next guys up need to step up to the plate.”
Even though the Bengals lost many players to college football, there are many key players to watch for the 2016 season. 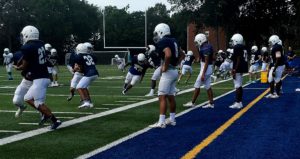 “We have a lot of young talent on our team,” Welo said. “One is our running back DeCavillon Reese, who is a very special player who started for us last year. Wide receiver Aubrey Warb is a big player maker, while our two safeties, Keith Williams and Jaczin Tytko, return to start on the defensive side, and we need a lot of production from those two guys.”

Welo also knows that there are many big games on this year’s docket.

“Archbishop Hoban always give us competition,” he explained. “Both teams go in there and grind and always end up in a close game. If you have Benedictine in front of your jersey, every team wants to go after us, because we’ve always finish on top in our division.
“Weather if its Ursuline in week one or Cleveland Heights in week three, the expectation is that we’re going to get the best from every team that we play and we going to do the same thing,” Welo added. “That’s how we going to play ‘Bengals football.'”

The team’s main goal will be to fight for a trip back to Columbus in the OHSAA state tournament.

“(We want) to win the NCL and get back to Columbus, but first, if we want to get there, we expect to go into every game prepared to play and hopefully to come out with a ‘W,’” Welo stated. “The NCL and the playoff push is right in our sites.”

The Bengals will look to start off strong, with the 2016 season kicking off against the Ursuline Fighting Irish at home, Aug. 27, at Bedford Bearcat Staduim.