Is Garoppolo Worth High Price Tag? 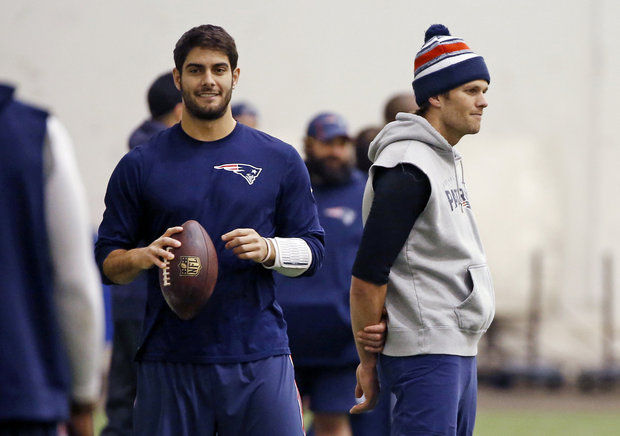 The talk has been hot and heavy as of late that the Cleveland Browns may trade for New England backup quarterback Jimmy Garoppolo.  While not having much experience, he did look good in two of three starts earlier this season for the suspended Tom Brady.

Despite his success earlier this season, the book on Garoppoli is awfully thin.  He has thrown just 93 career passes, with 5 touchdowns and 0 interceptions, good enough for a 107 QB rating.

The Price tag is extremely high as the Patriots are asking inquiring teams for a first round and fourth round draft pick in this upcoming draft.  It’s an awfully steep asking price for a guy who has less then 100 career passes.  Espically when you factor in that former number one overall pick Sam Bradford went for the exact same asking price from Philadelphia to Minnesota not to long ago.

I firmly believe a young team such as the Browns with so many large holes that they cannot afford to give up two valuable picks on a player with little to no experience at the pro level.  As of now, it appears that Sashi Brown and the Browns front office did a terrible job in the 2016 draft, they cannot afford to screw up again or Jimmy Haslem won’t hesitate to abort plan and start over once again.

Not just the Browns, but any young team cannot be fooled by such a low sample size, especially in a great system as New England’s.  Case in point, last year, Brock Osweiler looked great in the Denver Bronco scheme only to a have a miserable year in Houston this season.

The only other quarterback to come into a season and replace Brady was Matt Cassel in 2008.  We all remember what happened there as he led the Patriots to an 11 win season, (despite missing the playoffs), he would go on to sign a large contract with the Kansas City Chiefs that he never quite lived up too.

In four seasons with Kansas City, he was injury prone and went 19-28.  Since then, Cassel has played for Minnesota, Buffalo and Dallas in forgettable stints.

Is Garopollo the next Cassel?  This writer hopes the Browns are not the team to find out.

Does a Western Michigan Win Save A Miserable Bowl Season for the MAC?
Podcast: Amico looks back at the Cavs’ 2016