Friday Five: Things to Know Before The Browns Host The Patriots 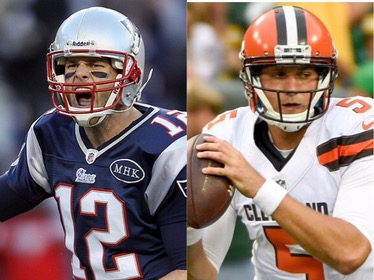 Here are five things you should know before the Cleveland Browns host the New England Patriots Sunday at First Energy Stadium.

1. Terrific Tom Is Back

Patriots QB Tom Brady is back after serving his four game suspension handed out by the league over the”Deflategate” controversy. The future HOF signal caller is licking his chops waiting to play the winless Browns for his first game. There could be a chance that Brady could be a bit rusty in but playing against a young and struggling defense like the Browns is the perfect opportunity for him to get all back into rhythm. The Browns players and coaches alike have expressed nothing but respect for Brady and Pats head coach Bill Belichick but have a plan in place to try and spoil Brady’s return.

Once again, there is going to be a change on the offensive line for the Browns. With backup C Austin Reiter tearing his ACL last Sunday,verteran G John Greco will be sliding over cover the position. Greco had time at center against the Dolphins and moved back to guard last week after Reiter got the starting nod. Reiter was upgraded as the starter after Cam Erving suffered a bruised lung in week 2 and it is still unclear when he will be back on the field. Browns head coach Hue Jackson stated “we’re just going to keep working some guys there, always got to have a backup plan and sometimes your backup plan is better than your other plan. We’ll see as we move through the week.”

With RB Isaiah Crowell carrying the bulk of the load for the run game, Duke Johnson Jr. has been showing that he is the duel threat that the Browns need him to be. His numbers this season don’t show what he has done for the team on third and short situations. the second year back said earlier this week that he is “more comfortable” than he was in his first year and looking to capitalize on his rookie year when he had 913 total yards. So far this season, Johnson ranks second in league with 6.2 yards a carry and has caught 18 passes for 124 yards.

4. Closer than you think

Since the Browns returned to Cleveland in 1999, they are 2-8 against the Patriots but lead the all time series 13-10. The last time the Browns played the Patriots, it took a fourth quarter comeback by Brady and a missed field goal attempt that was short of the goal post to beat the Browns. If you go back to 2010, the Browns actually defeated the Patriots convincly 34-14 with trick plays and a outstanding defensive effort by Cleveland. Only three of the eight game since ’99 have been decided by 11 points or more. Expect a hard fought, entertaining matchup between these two historic franchises.

The Browns are a young and raw team. In this years draft, the team drafted 14 rookies and signed them all to the team. That’s a lot of new faces that aren’t used to the NFL speed and overall play. QB Cody Kessler has been shoved into a starting roll on this team due to injuries to Josh McCown and Robert Griffin III. He’s had little time to prepare for the starting roll but is making the best of his situation. In two games, he has 461 passing yards with one touchdown and one interception. Not bad for the former USC Trojan. DE Carl Nassib is looking like he is going to return this week after suffering a broken hand in week 1. Nassib was a stand out in preseason and is a bright spot on this defensive line. The team has done better each week with all the injuries and new faces along the way and are looking to hopefully get over the hump and get their first win of the season this Sunday.