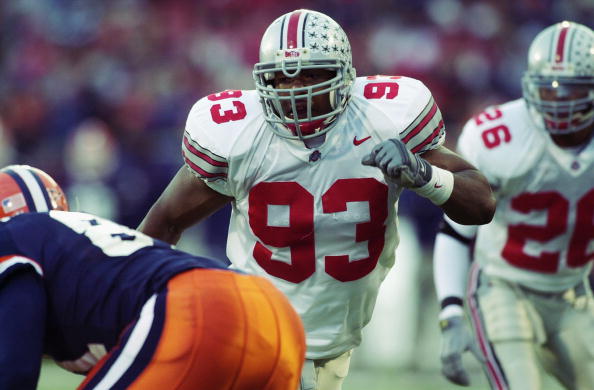 Smith, 34, was shot after exchanging words with the driver of a Hummer H2 that rear-ended his Mercedes G63 SUV, causing him to strike another vehicle, police said.

Smith was shot multiple times, and his wife, Racquel, also 34, was shot twice in the right leg, according to police. Smith was pronounced dead at the scene, while his wife was taken to a hospital.

“On behalf of the Smith family, we are thankful for the outpouring of support and prayers. We ask that you continue to respect the family’s privacy as they grieve the loss of a devoted husband, father and friend.”

Police said the 30-year-old driver of the Hummer was in custody and being interviewed, and that the handgun used in the shooting had been recovered.

Smith played for the Buckeyes on their BCS title team in 2002, and was a first-team All-American and Big Ten Conference Defensive Player of the Year as a senior, in 2003.

He was the Saints first-round pick in the 2004 NFL Draft, 18th overall.

Saints coach Sean Payton tweeted out about the death of one of his former players:

Heavy Hearts w the senseless passing of our Team Capt. Will Smith. Pray for his wife's recovery and their children. pic.twitter.com/VomR0Sut6M

What’ Going On This Weekend In Sports And Beyond!
Video: Watch Braxton Miller’s Visa 360° Virtual Reality Experience