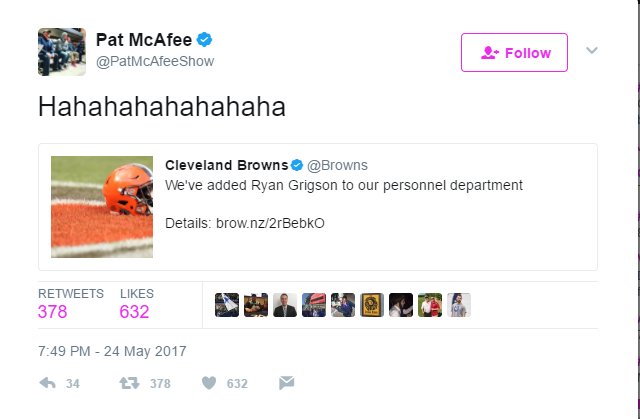 On Wednesday, the Cleveland Browns announced that Ryan Grigson was added as a member of the Browns personnel department. The Browns hired Grigson as Senior Personnel Executive.

If you would like to see the press release of the Browns hiring Ryan Grigson you can find it HERE.

Previously Grigson was the Director of Player Personnel for the Philadelphia Eagles from 2010-2011. Grigson was then the General Manager for the Indianapolis Colts from 2012-2016.

Former Colts punter Pat McAfee took to Twitter once he saw the news of Ryan Grigson being announced as a member of the Browns personnel department. McAfee played from 2009-2016 and played for the Colts while Grigson was the general manager there.

Former Colts Defensive End and Linebacker, Robert Mathis immediately replied back to McAfee’s tweet. Mathis played for the Colts from 2003-2016 and retired following week 17 of the 2016 season.

Where Have We Heard The Name Ryan Grigson Before?
RB Isaiah Crowell Declares the Browns Will ‘Shock the World’ in 2017