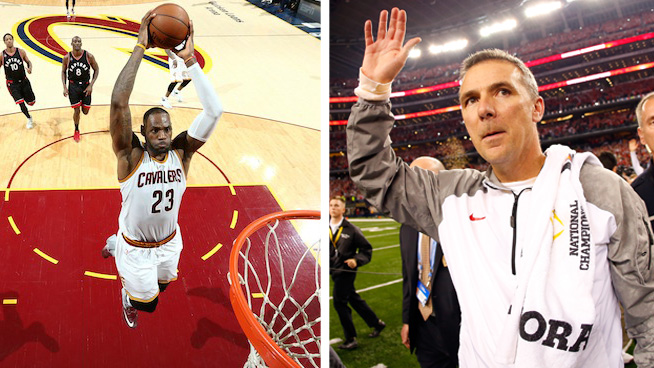 Now it’s 20 years later, and James is paying his respects back to Meyer, sending out a tweet as the Buckeye coach walks away with a Buckeye win 28-23 in the Rose Bowl over Washington.

James tweeted at Meyer as the Rose Bowl wrapped up, wishing Meyer nothing but the best in retirement.

@OSUCoachMeyer Congrats my friend!! Way to go out The only way that feels right and that’s on Top with a W! It was a pleasure to watch you lead this program throughout the years and I wish you nothing but happiness and health in the nearest future HOFer‼️???

The now Los Angeles Lakers star spoke about Meyer back in early December after the coach announced his plans to walk away, stating that he understands that the coaches health has to come first.

“My reaction? Um, I had two reactions, James said according to The Athletic’s Lakers writer Bill Oram.

“One is he’s been a hell of a coach for the Ohio State Buckeyes for years. But more importantly, his health is more important and that’s what it all boils down to.

“That’s a friend of mine and I’ve loved everything that he’s done at Ohio State being the coach of those kids and the program. But more importantly, his health is what’s more important.”

One Last Urban Tale, Buckeyes Look to send Urban Meyer Off with a Win at the Rose Bowl
Could the Cavs Deal Kevin Love? One Insider Says a Trade to Denver May Happen