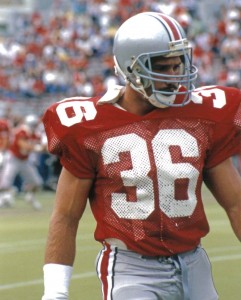 A former Buckeye great is suing the Ohio State University for improper use of athletes’ images.

Linebacker Chris Spielman has filed a lawsuit on behalf of every Ohio State football player for failure of compensation for marketing opportunities, including a Honda-sponsored program at Ohio Stadium featuring former players such as Spielman, Two-time Heisman Winner Archie Griffin, Jim Stillwagon and Mike Doss in the 64 banners hanging around the stadium. Nike’s “Legend of the Scarlet and Gray” vintage jersey licensing program as well as other apparel contracts with the Buckeyes.

The defendants for this lawsuit are Ohio State University, talent management company IMG, as Honda and Nike are co-conspirators for this case. “Unjust and monopolistic behaviors” and a compensation above at least $75,000.

An excerpt from the lawsuit is below:

“Former OSU student-athletes do not share in these revenues even though they have never given informed consent to the widespread and continued commercial exploitation of their images.”

Spielman is suing OSU with Profectus Group Inc., founded by former-Buckeye wrestler Mike DiSbato. This lawsuit was filed after the sides could not negotiate successfully through eight months of talks.