Five Takeaways from the Browns’ Preseason Loss the Bucs 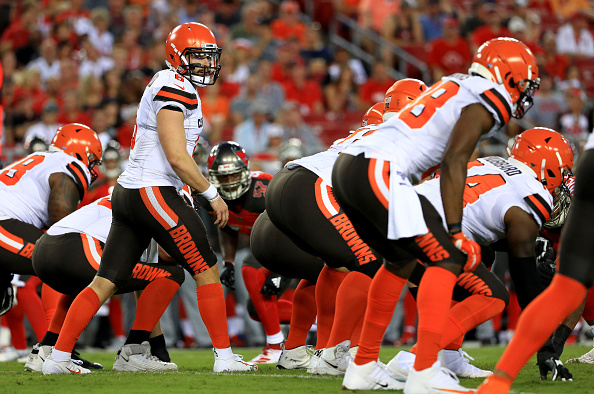 It was preseason dress rehearsal night for the Cleveland Browns, as they took on the Buccaneers in sweltering Tampa, Florida. The result wasn’t exactly thrilling, as Cleveland fell 13-12 in a contest that featured two offensively-challenged teams tonight.

Many view the third preseason bout as the most important of the four, though Cleveland continued its trend of keeping several starters off the field. Wideouts Odell Beckham Jr. and Jarvis Landry both sat out the entire game, along with running back Nick Chubb.

Despite this, there were still several takeaways from tonight’s showing. Here are five things which caught my eye.

In what turned out to be a surprisingly lengthy outing, Browns QB Baker Mayfield wasn’t exactly on his game tonight. He exited the contest at the halfway point, throwing for 72 yards on 10-of-26 passing, with no touchdowns and one interception. More than a few of his passes sailed a bit too high, especially the aforementioned pick. At the same time he received little help from his wideouts, who dropped several passes as well.

All that said, Mayfield was working without his starting receivers. Add the fact this was merely a preseason game, and it’s safe to just toss this away as a night to forget.

2. The Defensive Line is As Advertised

Opposing offenses be warned, double teaming Myles Garrett is no longer an option on Sundays. The Browns’ starting defensive line flexed its muscle tonight, as new acquisitions Sheldon Richardson and Olivier Vernon stood out with a combined three sacks.

Overall, Cleveland logged five sacks in the first half alone. If this is what we can expect from the Browns’ defensive line this season, the days of opponents focusing all blocking efforts towards Garrett are about to become a thing of the past.

Don’t look now, but the Browns may be on the verge of ending their kicking woes.

Head coach Freddie Kitchens switched things up tonight, giving rookie Austin Seibert every field goal opportunity as opposed to rotating him with incumbent Greg Joseph. Seibert took advantage of it, hitting all four of his attempts, including one from 54 yards out.

Kitchens leaning on just one kicker was telling, and could indicate that Seibert actually has the inside track. That he converted each of his kicks further solidified that as well. Here’s hoping one of Cleveland’s biggest roster questions is about to be resolved.

The good news is there weren’t any glaring concerns for the Browns tonight when it came to right guard. The bad news is this helped highlight a sizable red flag seen at a different position on the offensive line.

Greg Robinson, currently penciled in as Cleveland’s starting left tackle, had himself a rough night. The 2014 second overall pick was beaten several times, giving up a sack and getting called for a holding penalty, as well. Offensive line continues to be one of the Browns’ biggest question marks, and Robinson’s play tonight did little to alleviate that.

5. Not Much From The New Guy

Buckeye fans were likely eager to get a look at the Browns’ latest signing, former Ohio State quarterback-turned-wideout Braxton Miller. Unfortunately, he didn’t find his way onto the field until late in the fourth quarter, finishing the night with two receptions for eleven yards.

I expressed skepticism in this signing a few days ago, and little happened tonight to make me feel otherwise. Miller’s road to clinch a roster spot remains extremely uphill, and he’ll need to show a lot come Thursday to convince the Browns to keep him around.

What’s Next: The Browns return to Cleveland for the Great Lakes Classic, hosting the Detroit Lions in the preseason finale. For the starters, it’ll be a fun night to sit back and watch football without having to play a down. For the bubble players, though, it’s one last shot to lock down a roster spot.

After that, we finally get to the games that count.