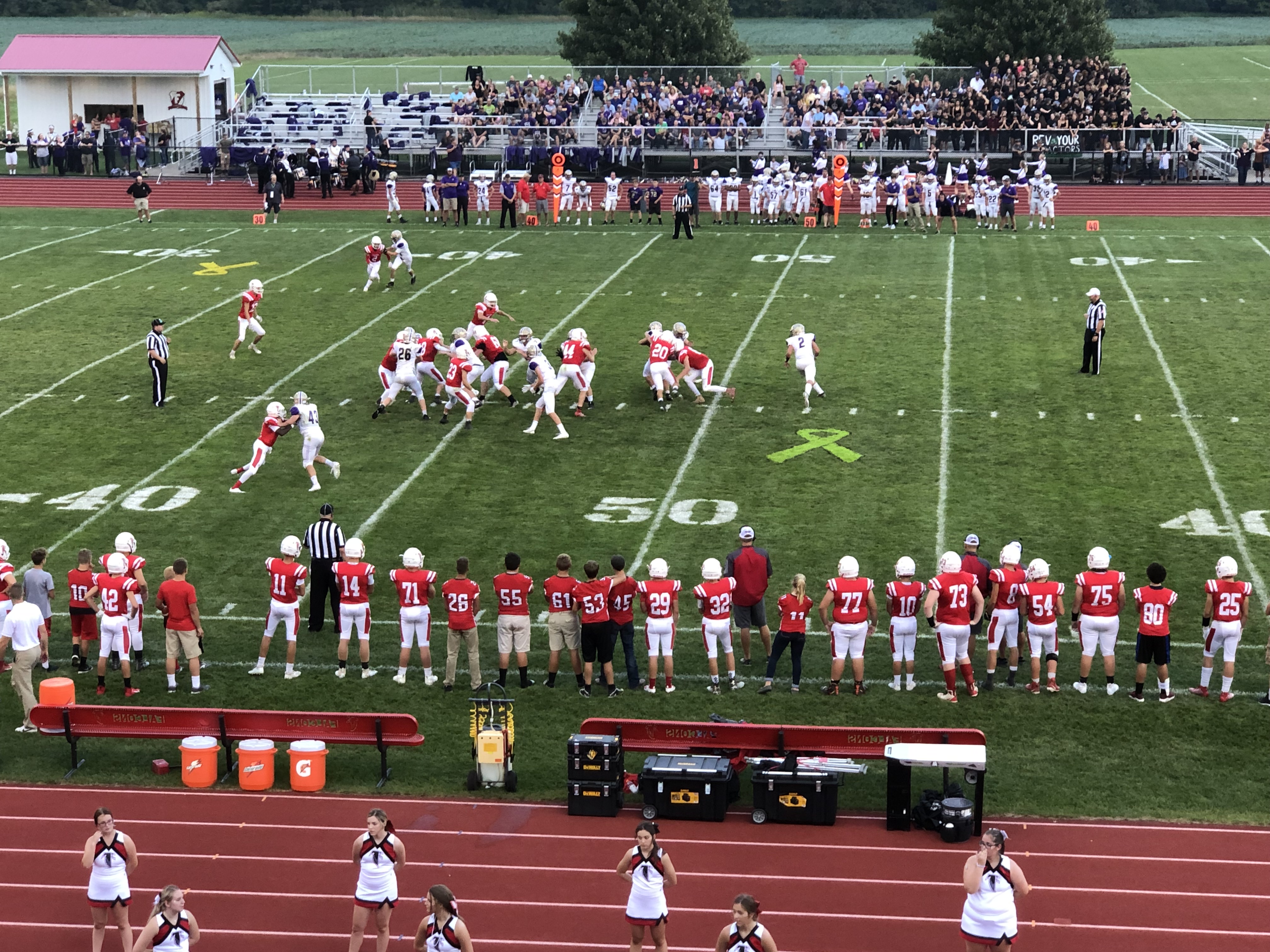 OBERLIN, OHIO – On a hot mid-September night at Firelands high school, the Vermillion Sailors took the short trip down the street to battle the Firelands Falcons, a rivalry game that was hindered by Mother Nature.

Anticipating the storms ahead, like other teams around Lorain County, the game was moved to a 6pm kickoff, and for the Falcons it was enough as they clawed to their first win of the season, shutting out the Sailors 21-0.

Early in the game, it was definitely a great defensive battle. Both teams couldn’t produce much offense, and both teams produced a scoreless first quarter.

The Falcons forced a turnover to start the 2nd quarter on the Sailor 15-yard line, but couldn’t produce points on a missed field goal from kicker Evan Tester. With 2:39 remaining in the second quarter, we had a lighting delay as the storms quickly approached, and all players were sent to the locker room.

Both teams played a very gritty first half fighting to make sure the opposing offense didn’t get any points whatsoever. After a one hour and 33 minute delay, the players took the field to finish out the first half.

Firelands exploded with a pair of deep passes in a hurry up offense from Falcon QB Jacob Farley, and eventually they settled for a field goal from Evan Tester to make the score 3-0 Falcons.

Firelands then onside kicked and recovered the ball at the Vermillion 36-yard line with nine seconds to go in the second quarter.
An incomplete pass ended the official half (not counting the delay). As the second half started Firelands continued to use their hurry up offense.

Firelands defensive pressure from the D-line didn’t help Vermillion get in a groove after the long delay.

The Falcons controlled time of possession on the offensive side of the ball. Penalties also started to haunt both teams as we neared the fourth quarter.

Firelands cleaned it up with 56 seconds left in the third quarter on a Carter Janicek touchdown run, making it 15-0 Falcons.

Vermillion QB Ben Rini started to mix his cadence up, catching Firelands defenders off guard and drawing offside penalties to try and get something going for his offense.

The cadence worked even though the rain intensified, as Vermillion started to dump off screen passes to get their offense going.

Rini was moving out of the pocket almost the whole second half as the Falcon front line was pressuring him very heavily.

The Vermilion quarterback gave a great effort into trying to get something going for his offense, but as the rain picked up, they just couldn’t get anything going.

Rini threw an interception, which then lead to a near 55-yard touchdown drive making the score 21-0 Firelands.

As the game carried on, the rain picked up and unfortunately Vermillion’s defense was tired out, after being out there almost the whole second half.

To end the game, Vermillion had the ball backed up against their own end zone, but couldn’t get moving to end the matchup with Firelands taking home a 21-0 win.

The victory moves the Falcons to 1-2, while Vermilion drops to 0-3 on the season.