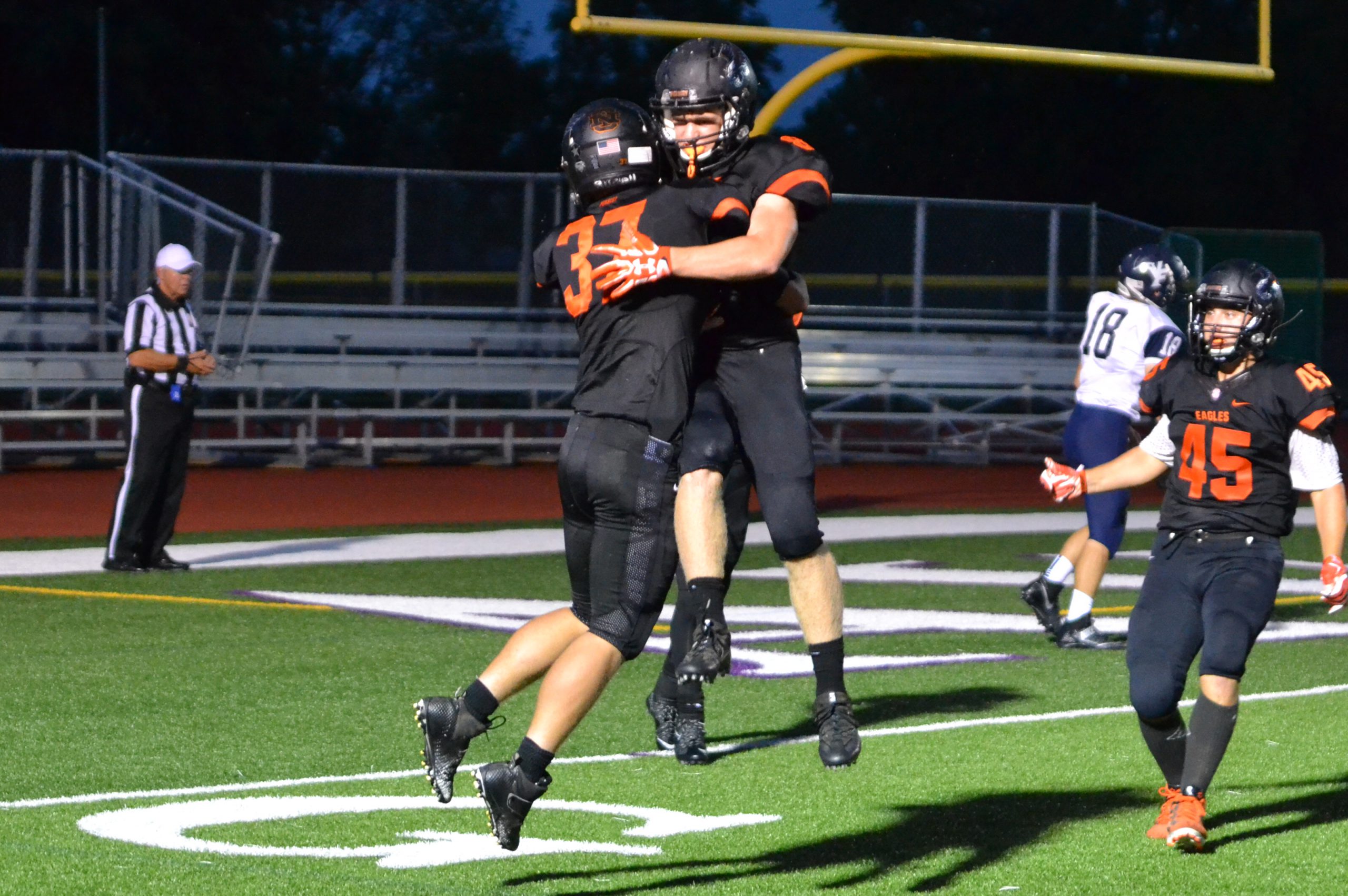 AVON, OHIO – The 2016 high school football season got off to a sticky start on Thursday night at Avon Stadium, as the North Olmsted Eagles laid a 39-14 beating on the Valley Forge Patriots to start the season in dominating fashion.

It wasn’t exactly a night made for football, as the temp with the humidity at kickoff clocked in at 88 degrees, and didn’t drop much throughout the evening.

It didn’t seem to effect the run game of the Eagles, as they beat up the Patriots up front, with leading rusher Darren Anders going off for 99 yards on 18 carries in the first half, as North Olmsted built a 32-0 halftime lead.

“It’s been a long process, and the way we came out early, I am really proud of my guys,” Eagles coach Tim Brediger said. “We haven’t had the healthiest of two days, we’ve been pretty banged up, we had to shuffle around a lot of guys, we had six or seven sophomores on the field early for us, and they did a great job.”

Quarterback Brandon Maximovich, who didn’t throw much early in the game, ended the night 5-for-8 for 146 yards and two scores. He also rushed for a score early in the second quarter. 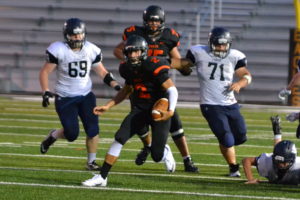 The early part of the affair was close, as the Patriots were unable to generate much offense, while the Eagles used the legs of Anders to drive down for an early field goal to go up 3-0 after an opening six-play, 32-yard drive.

They created more distance in their next drive, as Anders again carried the load, and on a 4th-and-3 from the 13 he pulled in a middle screen from Maximovich and rumbled 13 yards to make it 10-0 with 3:14 left in the first quarter.

It got to 17-0 in the second quarter, as Maximovich ended an eight-play drive that covered 24 yards after a Patriots fumble. Andres scored for the second time on a two-yard run to make it 23-0 with 8:40 left in the first half.

Senior linebacker Chandler Johnson, who had a monster night, got the next two points for the Eagles, recording a safety to make it 25-0.

The first half scoring ended with an Alex Quinones three-yard run with 3:39 left in the half to make it 32-0. It could have been worse, but the Eagles ended the first half inside the Patriots five.

If there was any doubt, the Eagles struck quickly as Maximovich hit senior wide out Jae Hun Shin with a 54-yard score to make it 39-0 with 10:03 left in the third quarter.

The Patriots were able to get the final two scores of the game to make it a 39-14 final. Running back Louis Arena scored to make it 39-7 with 8:19 left in the final quarter, and the team scored a final TD by QB John Quinones with just six seconds left to close out the scoring.

Johnson was the star on defense for the Eagles, recording the safety, a fumble recovery, three tackles for losses and a sack. The North Olmsted defense held Valley Forge to 114 total yards, 99 rushing and 15 passing.

“This week was the most physical week we’ve had all camp,” Brediger said. “I’m very proud of the effort they put forth, and the next nine weeks are going to be a big test for everybody in the conference and we’re a pretty young team, so we are going to rely heavily on our seniors.”

The game, which was played in Avon, is one of the new homes for the Eagles, as they won’t have their new stadium for two seasons.

“Very proud of the effort these guys gave, and that’s a Valley Forge team that I think is going to win some games, we were just able to stop it tonight,” Brediger said.