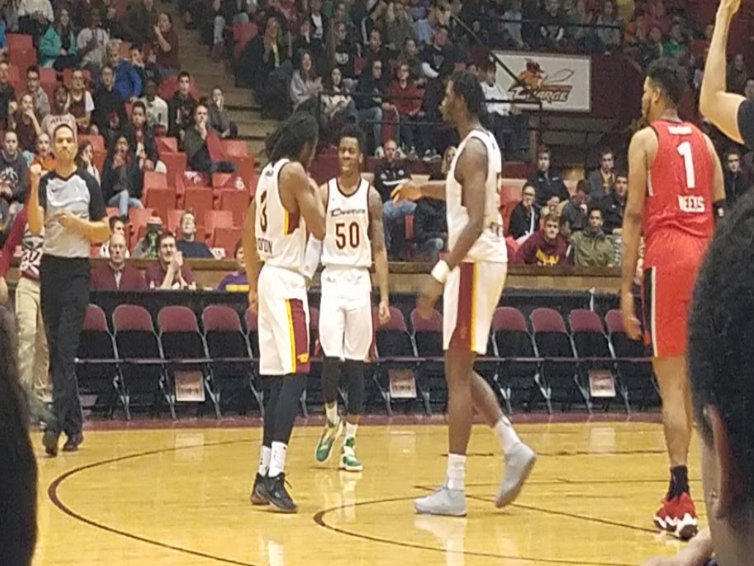 CANTON, OHIO– When a team is struggling sometimes keeping them on their toes is exactly what they need. Wednesday’s 11am start was exactly what the Canton Charge needed as they finally were able to give the home fans something to cheer about. Only difference is, the home crowd was a little bit crazier than normal as Wednesday was a school day at the Canton Memorial Civic Center, meaning a crowd of mostly kids witnessed a 102-97 Charge win over the visiting Raptors 905.

The Charge came into Wednesday’s game winning just two of their last nine games, and seemed to be struggling to close out games. The good news for the Charge was that Wednesday’s game marked the first game of the second half of the season.

Coach Nate Reinking was pleased to get started off on the right foot.

“We kind of drew a line in the sand for the first 25 games,” he said. “We gotta wipe them out. The second half of the year we have to take each game one at a time.”

Another bright spot for today’s ballgame was the return of Cavaliers two-way guard John Holland. Holland has not played since Dec. 13 when he suffered a left shoulder injury. No one was happier for Holland to be back than Holland himself.

“Honestly makes me appreciate being out there,” Holland said. “Not that I didn’t before. But even more now. Even in practice, I’m like this is so much fun.”

The Charge really looked to exploit Swanigan’s size advantage in the post. While Raptors 905 has big bodies down low, no one was physical enough to slow down Swanigan in the second. He finished the game with 18 points and 10 rebounds as Canton seemed to shy away from the post in the second half.

While Swanigan and Holland dominated the first two quarters, the third quarter began about as well as it possibly could for Canton as the Charge started on an 11-0 run, including six straight points by Charge forward JaCorey Williams. Despite the strong start to the half, the Charge were unable to hold onto the big lead and they were up by just three, 69-66, going into the fourth quarter.

Just as the Charge began the third quarter with a spark, Kevin Olekaibe hit his two 3-pointers on back-to-back possessions, in the first minute of the final quarter. While looking and watching Olekaibe get hot Marcus Thornton said watch this.

“He’s a shot makerm, and he takes big shots. Without London today, we burned his minutes,” Coach Reinking said of his point guard’s performances today. “(He) came up big when we needed him.”

Thornton played all but a minute and a half of the game, and that came in the final moments of the first half. The rest of the night the Charge guard set the table for Canton as he had five assists and zero turnovers despite being the primary ball handler.

There was a stretch during the middle of the fourth where Thornton completely took matters into his own hands as he hit three straight 3-pointers, highlighted by the last one resulting in an and-1 where he converted the free throw for a four-point play. This would prove to be the final field goal of the game as the Charge finished the rest of the game from the free throw line, converting 8 of their 12 free throws down the stretch.

Canton needed this win today, as they have two more games this week as they try and climb their way back to .500. Wednesday marked just Cantons third win at home this season and Coach Reinking knows this needs to change, saying the Charge “gotta protect home first.”

The Charge travel to Erie on Friday to take on the Bayhawks before returning home the next night for their first matchup with the Sioux Falls Skyforce at 8 p.m.

Cleveland State Prepares For Showdown With IUPUI Thursday Night
Amid rumors and innuendo, Cavs must find answers in “challenging” season