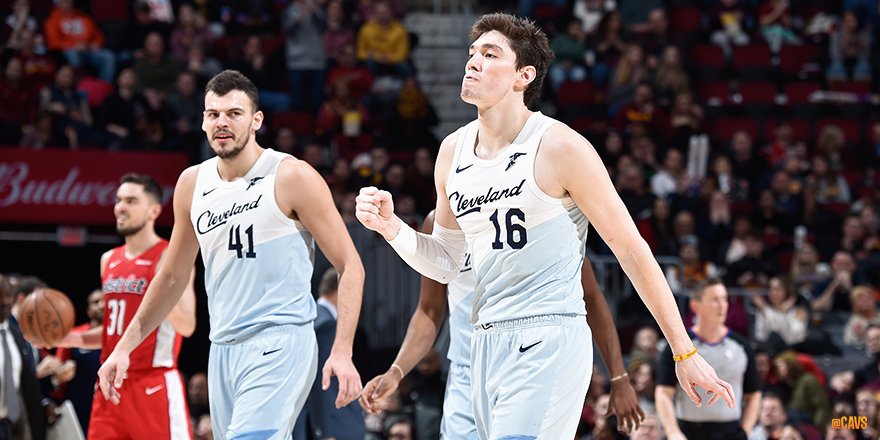 Cleveland- With the Cleveland Cavaliers homestand wrapping up on Monday night, fans have to optimistic about the Cavs play of late. Winners in five of their last ten games, the Cavaliers have played some of their best basketball lately.  An obvious reason why is the return of All-Star forward Kevin Love, his presence makes a clear difference for the young Cavs.

Without Love, this season, Cleveland’s front office shifted their focus to asset building rather than winning. A model that is often scoffed at because it appears that the ultimate goal is losing, and no one wants to cheer for a losing franchise.  So while the ending result may have been losing, the main goal of this season was rebuilding.

Once LeBron James left for Los Angeles the front office was forced from the spotlight back in with the rest of the forgotten NBA franchises. Only that wasn’t what a highly competitive owner would want, and Dan Gilbert fits that bill. Gilbert and co. believed that with Love as the centerpiece the Cavaliers could fight for a playoff spot in the Eastern Conference, even if it was an eight seed.

The NBA playoffs are a money-maker, even without a long-run to the finals, Cleveland would’ve been ensured two home playoff games. As everyone knows those plans were scrapped less than five games into the season when Love went down with a foot injury. The next few months resulted in a lot of change and a lot of losing.

The Cavaliers appear to be heading to towards a top-5 pick, all depending on how the last part of the season wraps up. As the standings stand currently, Cleveland (14-46) currently has the third worst record in the league. Sitting two games behind the Chicago Bulls for the fourth spot, the Cavs seemed poised for a bottom three finish.

All of this, of course, implies the Cavaliers playing like the team they’ve been much of the season. Love being on the floor makes that seem unrealistic, which may not be a bad thing. The most important thing for Cleveland this season was to figure out what pieces they could build with going forward. Two obvious candidates have been at the forefront of this movement most of the season, Collin Sexton and Cedi Osman.

These two players have taken their lumps this season, much like most young players in the NBA. Tasked with much more responsibility than either of them were quite ready for, they struggled, and as did the Cavaliers. Again this was okay.

The NBA is great because it gives teams the ability to rebuild on the fly much faster than other professional sports leagues. The Cavaliers resigned Love last offseason to build around going forward, and if things don’t work out? They have a great asset in a couple of seasons, but the goal was always to win.

Osman and Sexton had to learn the grind of the NBA season for their development, despite hope seeming lost at points. There are now 25 games left in the season, and the goal shouldn’t be “tanking for Zion.” As great of a player as Zion is, fans should want this current crop of Cavaliers to develop good winning habits rather lose on purpose.

This was no more apparent than on Saturday night when both Sexton and Osman made big plays down the stretch. Without Love on the floor, Osman and Sexton made winning plays to help close out the Memphis Grizzlies. After the game, Love pointed out how big this was for the young players.

” Cedi had a tough three and a half quarters, and he made big plays for us down the stretch. So I was happy for him. I said it’s going to be like that sometimes, and he stepped up for us big down the stretch.”

The young Cavaliers have a much tougher challenge ahead of them on Monday night. The Portland Trail Blazers are currently holding onto the fourth spot in the Western Conference playoff picture. Lead by one of the NBA’s best trios, Damian Lillard, CJ McCollum, and Jusuf Nurkic, Portland will be looking for their fourth straight win.

Monday night will be the second game between Cleveland and Portland this season, with the Trail Blazers winning 129-112 in January. Jordan Clarkson led the Cavaliers that night with 22 points, followed by Rodney Hood with 20 points. Hood is now a member of the Trail Blazers and will be making a homecoming of sorts Monday.

Even as tough of a match-up as the Trail Blazers are, Larry Nance Jr seemed optimistic after shootaround. After experiencing a tough season, the recent stretch has been important for the young Cavaliers. “It’s an improvement. It’s growth. That’s what we’ve been saying this year is about, seeing different guys step up in different ways. And learn and grow, it’s been good for us.”

Everyone always talks about the Portland backcourt, and rightfully so. This season Lillard and McCollum are averaging just under 46 points a game as a backcourt, and have the ability to both drop 30 on a given night.

As great as those two are, the Cavaliers biggest test may be on the boards. This season Portland has been one of the leagues best rebounding ballclubs, averaging (47.9) rebounds a game. Since adding Enes Kanter, the Trail Blazers have become even more difficult to stop. The combination of always having either Nurkic or Kanter on the floor will keep the Cavaliers big men busy.

In two games Kanter has grabbed 17 total rebounds in around 20 minutes of action.