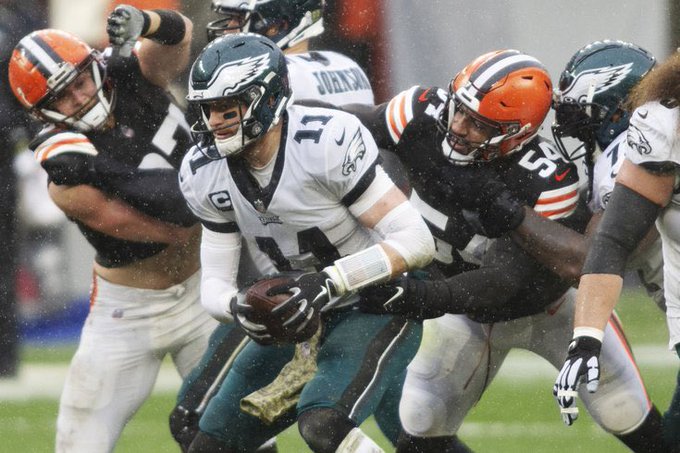 Another Sunday brought inclement weather, as the Cleveland Browns welcomed the Philadelphia Eagles to FirstEnergy stadium in a week 11 matchup.

The offense struggled throughout the entire first half, but the defense stepped up to lead the Browns to a 7-0 halftime lead behind a Sione Takitaki interception return for a touchdown. The second half brought a healthy dose of Nick Chubb as a 10 point fourth quarter sealed a 22-17 victory.

The Browns opened the game on offense, but failed to get anything going, being forced into a quick three and out by the Eagles defense.

After the Jaime Gillan punt, the Eagles running back tandem of Miles Sander and Boston Scott helped walk their offense right down the field to set up a first and goal at the five. However, Sanders would fumble on the first down run coughing the ball up to Browns safety Karl Joseph

After the turnover, the Browns put together a long 13 play drive stapled around a 43 yard reception by Rashard Higgins to put the ball in the red zone. After a pass interference penalty put the ball at the one yard line, the Browns offense would be stuffed short after a Kareem Hunt touchdown was overturned on the fourth down attempt.

After taking over at the one, two big pass plays from Carson Wentz put the Eagles in Browns territory quickly. However, head coach Kevin Stefanski would dial up a second down blitz for Denzel Ward, who hit Wentz on the play forcing a flailing ball into the arms of Takitaki for an interception return touchdown early in the second quarter.

After the score, Wentz and the Eagles offense continued to struggle, only avoiding a three and out after a gift wrapped first down from an Andrew Sendejo unnecessary roughness penalty that took away a third down sack. To no avail, as three plays later Olivier Vernon would get a third down sack to force a punt.

Both offenses continued to struggle throughout the second quarter, trading punts the next four possessions to end the half with the Browns leading 7-0.

The Browns defense would open the second half strong, forcing another three and out after Vernon registered his second sack of the game on third down.

Disaster struck on the Browns first possession of the third quarter. On second down Baker Mayfield dropped back to throw, but got gobbled up by the Eagles defensive line. Fletcher Cox forced the ball out of Mayfield’s hands to give the Eagles offense the ball at the Cleveland 19.

After the fumble, Wentz would find his tight end Richard Rodgers on the first down play for a 19-yard touchdown catch, setting up a Jake Elliott extra point to tie the game at seven.

The Browns offense bounced back after the Eagles score, with Mayfield opening the ensuing drive with a 42 yard connection to KhaDarel Hodge to cruise into Philadelphia territory. However a third down sack from Alex Singleton of Mayfield would force the Browns to settle for a Cody Parkey field goal and 10-7 lead early in the second half.

After the score, the Browns defense once again buckled down forcing another three and out to keep the Eagles offense at bay.

Looking to build the momentum, Mayfield and Chubb combined for a quick first down. However, facing third and five in Philadelphia territory, the offense turned to Hunt to convert but lost nine on the play to force a punt.

Gillan struck a perfectly placed punt to pin the Eagles back at their own two. Sanders would get a two yard first down run to give Wentz some room to drop back, however Vernon would get his third sack of the game on second down in the endzone for a safety and a 12-7 Browns lead.

After the free kick, the Browns offense rode Chubb to near the red zone, before a mistimed backward pass from Mayfield to Hunt on third down forced another Parkey field goal attempt early in the fourth quarter. This time however, the line opened up to allow Derek Barnett to block the field goal and give the Eagles life.

After the block, a big 29 yard connection from Wentz to Rodgers avoided another three and out to put the Eagles deep in Cleveland territory. In response, the Browns defense would tighten up to force two straight second and third down incompletions to force an Elliott field goal.

Clinging to a two point lead the offense put together a quick scoring drive to extend their lead to nine. Mayfield opened the drive finding Hodge for 18 yards, before Chubb stiff armed his way through eagles defenders on his way down to the Philadelphia 7 for 54 yards.

Two plays later Hunt found the endzone on a five yard run, hurdling safety Jalen Mills to find his way inside the pylon.

Wentz and the offense now faced a two score deficit, but found no sense of urgency on the following possessions, once again being forced into a three and out by the Browns defense.

After the punt, the Browns offense began to bleed the clock with their rushing attack, going on a long 10 play drive behind runs from both Chubb and Hunt before settling for a field goal and a 22-10 lead.

The Eagles opened the next drive fast, getting to near midfield before a pass interference penalty on Denzel Ward awarded 33 yards and a first down at the 10 yard line. Luckily, revenge came for the Browns corner on the next play, intercepting Wentz, who overthrew Greg Ward trying to avoid a defenders outstretched hands.

Despite the momentum being in their favor, the Browns would go three and out on the next drive being content with just running the ball to run down the clock, but only took 22 seconds of game time on the possession.

Wentz found his way in the next possession facing the prevent defense of the Browns. Taking eight plays and just over a minute before finding tight end Dallas Goedert in the endzone to cut into the Browns lead. However, they would need to recover the kick on the ensuing kick off for any hope in the game.

Harrison Bryant would become the hero of the hands team after the Eagles scored, quickly recovering the Elliott onside kick to seal the win after a Mayfield kneel down. The Browns beat the Eagles 22-17 and move to 7-3 on the season, already beating last year’s season total in wins.