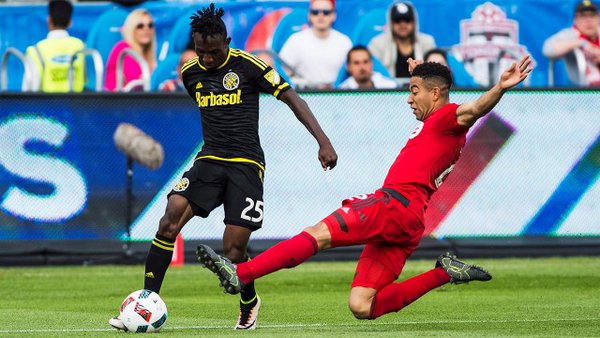 The Cleveland Cavaliers aren’t the only Ohio team to travel across the Canadian border to take on a team from Toronto. The Columbus Crew took their talents to BMO Stadium to take on the Toronto FC Saturday, May 21, 2016 for an Eastern Conference rival showdown.

Columbus was able to take 15 shots, 5 of which were put on goal, and held Toronto to 8 shots. Only 2 of those were on target for Toronto. Columbus was also able to possess the ball for about 56% of the time. Toronto goal-keeper Clint Irwin had himself a game with 4 saves and a shut out. Steve Clark only had to make 2 saves the whole game. So needless to say the net minders and the defenses were playing at high levels. And one thing Toronto for sure had going for them was the corner kick ratio. Toronto was able to produce 13 corner kick opportunities while Columbus could only muster 6.

Columbus’s biggest issue is playing good soccer only in spurts. They do not struggle to put good touches together to make plays through the mid field, they merely struggle capitalizing on goal scoring opportunities.

That means the decision making in the Crews final third needs to get better, and I think it will. Since the loss of Kei Kamara, Ola Kamara has taken the mantel as the top lone striker for the Crew SC and showed glimpses of he is the next man up for the job.

Kamara missed his connections by very slim margins but if given enough time to develop chemistry with the likes of Federico Higuain, Cedrick Mabwati, and Justin Meram, he could become something very special.

For the Crew SC to pull off a 0-0 draw against a very good Toronto squad lead by USA Soccer standout Michael Bradley and the 2015 MLS MVP Sebastian Giovinco amidst all the scuffle from the departure of Kei Kamara was an impressive and encouraging feat in itself.

Columbus now has a 2-4-5 record after their Saturday match against Toronto FC and still sit in 9th place of the Eastern Conference with 11 points and right average 1 point per game.

Next up for the Crew SC is a home match against Real Salt Lake Saturday, May 28th at 7:30 PM. Go Crew!