Cowboys to Remain with Dak Prescott at QB Against Browns Sunday 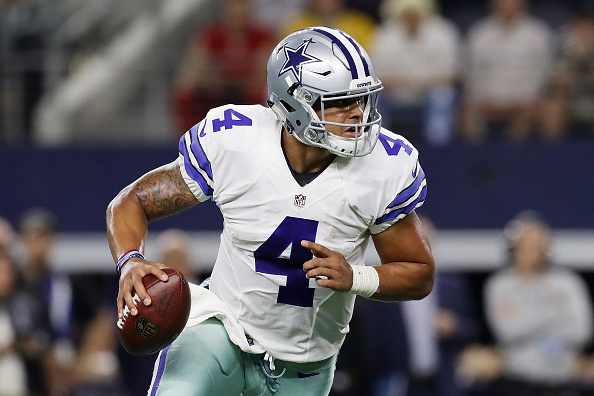 Cowboys quarterback Dak Prescott is having a magical season for ‘America’s Team,’ leading Dallas to an overtime win over the Eagles on Sunday night on National TV, and having the Cowboys at 6-1 at on top in the NFC East.

There was some discussion about the team going back to Tony Romo at quarterback, but following the win over the rival Eagles on Sunday, owner Jerry Jones said that Prescott will be the Cowboys QB Sunday when Dallas visits the lakefront to take on the 0-8 Browns.

“Tony’s making a lot of progress,” Jones said. “We’re excited about that, but at this particular time I don’t have any more [to] clarify. My opinion is Dak will start against Cleveland.”

Prescott has been sensational for the Cowboys, a QB rating of 99.6 and he’s thrown nine touchdown, just two interceptions, and has thrown for 1773 yards, rushing for 105 yards and four scores.

Sunday night Prescott struggled, completing 19 of 39 passes for 287 yards, but got his team from 10 down to overtime and was very good, hitting all five of his passes for 56 yards and the game-winning score to tight end Jason Witten.

As far as Romo goes, the Cowboys former starting quarterback has had one limited practice since suffering a compression fracture in his back late in the preseason against the Seattle Seahawks.