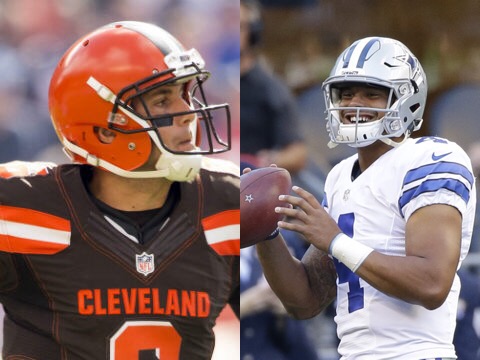 America’s Team pays a visit to The Land tomorrow afternoon as the surging Dallas Cowboys (6-1) take on the struggling and banged up Cleveland Browns.

This is a tale of two teams going in two completely different directions. The Cowboys have improved from a season ago, using their solid quarterback play from rookie Dak Prescott to lead the NFC. As for the Browns, they’re still looking for their first win of the season and are using their rookie QB Cody Kessler who has been cleared to play after suffering a concussion two weeks ago against the Cincinnati Bengals.

Although the Cowboys are favored to win the game, they can’t sleep on the Browns because even though there record shows no wins, they have come extremely close to winning games yet always falling short in the end.

The defense has been atrocious even with some rookie play makers like Carl Nassib and Emmanuel Ogbah but it gained a boost at the linebacker position as Jamie Collins was acquired from the New England Patriots just before the trade deadline. Attacking the stacked Cowboys offensive line and getting to the rookie QB should be priority number one for the defense this week. Cowboy’s RB Ezekiel Elliot, the NFL’s leading rusher this year, also needs to be held in check for the Browns to have any chance of winning.

This won’t be the hardest test for the Cowboys, but it could be a statement game, showing the rest of the NFC that their team can beat any team, good or bad, home or away. For the Browns, a win would just be a good feeling to the team and for the fans.