Could OLB Anthony Barr Be a Match for the Browns this Offseason in Free Agency? 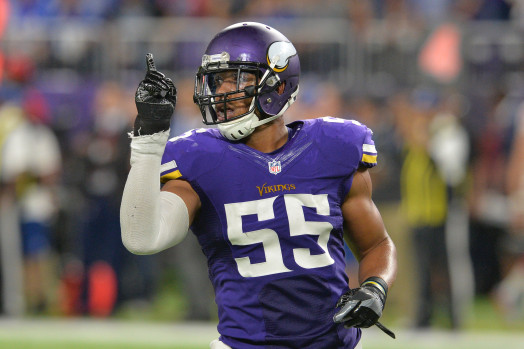 With the NFL free agency signing period set to kick off on March 11th, there’s going to be plenty of speculation as to what players the Browns may target to improve their team in 2019.

One player that could be a fit is Minnesota Vikings linebacker Anthony Barr, who has had five successful seasons in Minnesota but sounds like he’s ready to move on.

Which leads many NFL teams, including the Browns, in an interesting position as the team could use another outside linebacker to pair with rising star Myles Garrett.

It will be interesting to see the value that Barr gets, as he played in just 13 games in 2018, which was the fewest he has played in since his rookie season, recording three sacks and a career-low 55 tackles while dealing with a midseason hamstring injury.

The season before Barr put up one sack in 16 games with 75 total tackles for a team that made the NFC Title game before losing to the Eagles.

The Browns will have plenty of cap space to ink a player like Barr, who could get up to $50 million on the open market, as the team should have more than $80 million in cap space for 2019.

The 2014 first round pick of the Vikings is still just 26 years old, so could also make for a solid locker room addition as well for a team that is looking to pile up more defensive play makers.

Let’s see if the market goes higher for Barr by the time it’s all said and done, but for the Browns, adding a player with his resume can only make them better.