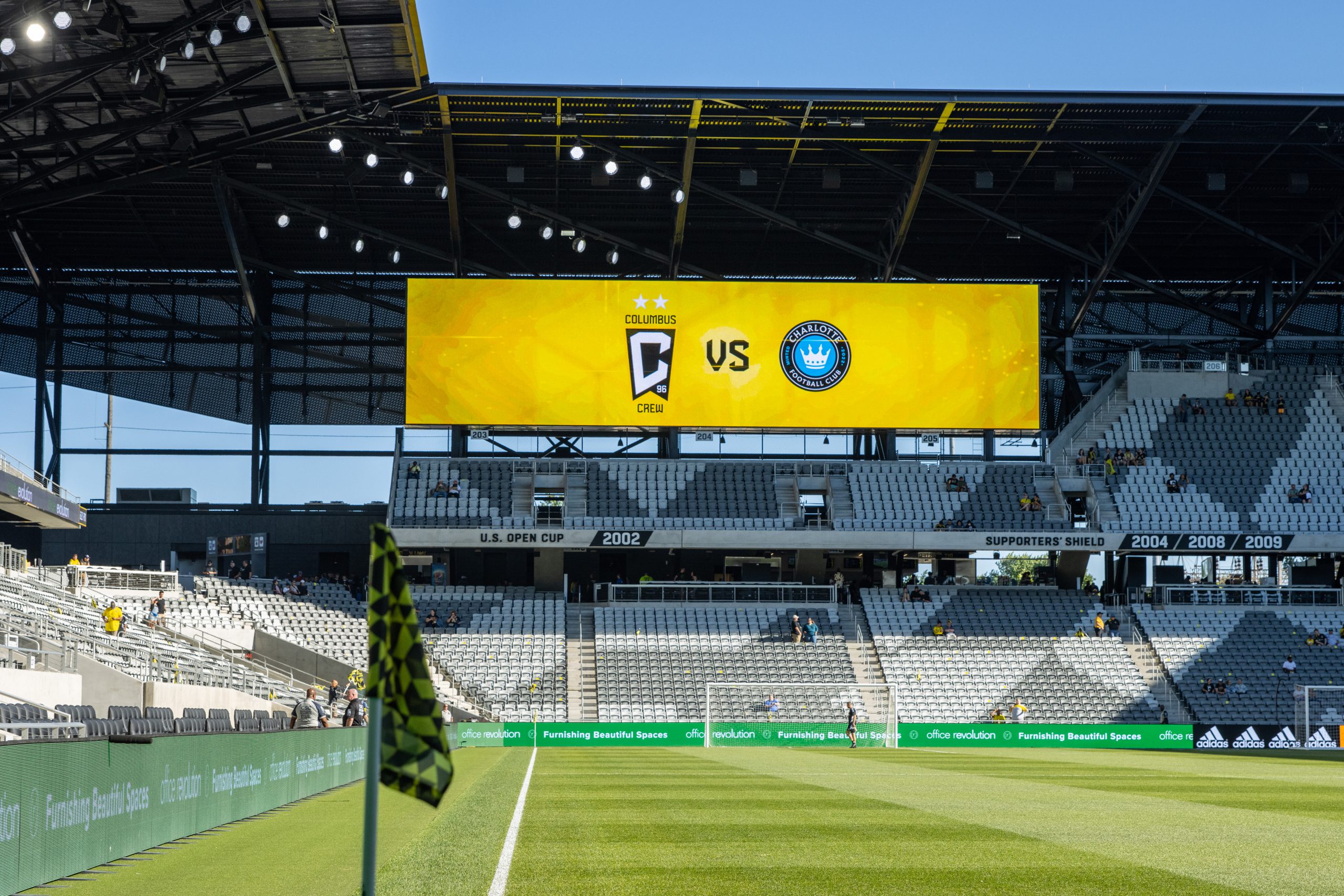 Columbus had themselves a busy Saturday. The Pride parade through the city was the first in three years. The Clippers had a late afternoon game with the bottom of the ninth, 2-out game winner stroked by Franmil Reyes.

The Crew ended the Saturday celebrations by highlighting the MLS SOCCER FOR ALL night, a month-long celebration of soccer being a world sport, with their first match against Charlotte FC.

But unlike the Clipper victory, the Crew settled for a 1-1 draw against their visitors from North Carolina and missed out on a great opportunity to snag three points. The Crew goal was scored by Erik Hurtado, the Virginia native and four-year starter from Santa Clara University. Charlotte’s lone tally was credited to Andre Shinyyashiki early in the second half.

The Crew (4-5-5) currently sit in 10th place with 17 points, while Charlotte (6-8-2) jumped up to 6th in the Eastern Conference. The sellout crowd saw an entertaining game.

Coach Caleb Porter’s postgame response made it clear that this was a missed opportunity. Both clubs sported “Freedom To Be” jerseys representing Juneteenth and T. Wong, a local musician, sang a rendition of the Black National Anthem prior to the Star-Spangled Banner on the beautiful, clear Columbus night.

Porter had to make five substitutions to his lineup due to injuries again. And he would often change formations in the second half. 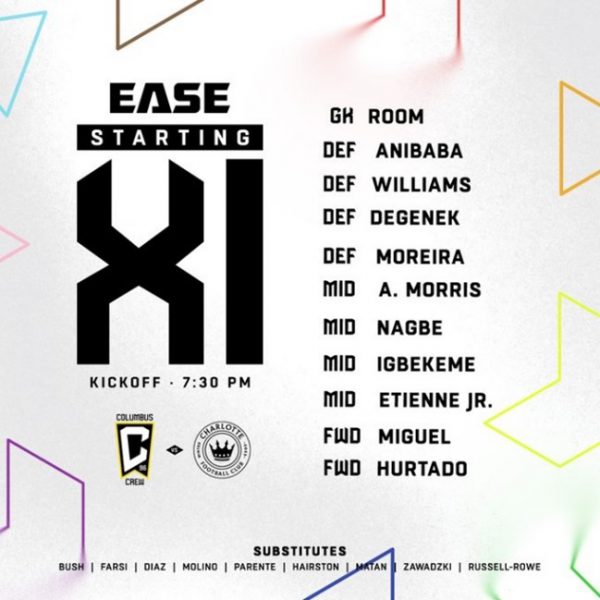 The play started quickly. Early in the 2nd minute the Crew had their first corner, and the kick found defender Josh Williams, where the Akron, Ohio native sailed his header over the bar. Then in the 7th Miguel Berry, playing forward in Porter’s 3-5-2 starting formation, sailed a shot into the crowd. 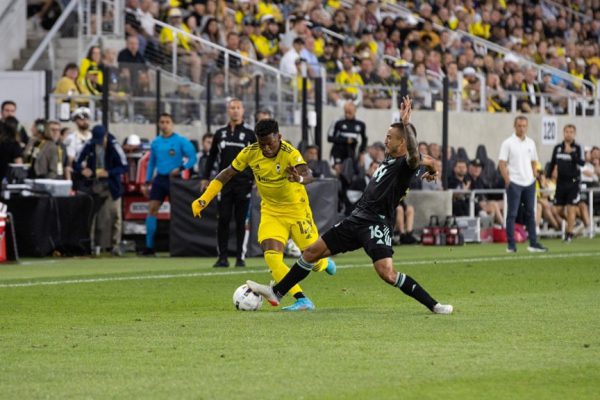 (Photo by: Charles Murray @CharlesMurray15…Luis Diaz for the Crew)

Charlotte got their first corner in the 10th minute. The inswinging ball came into the box but was headed wide by Shinyashiki.

Charlotte’s best chance came in the 28th minute. After a steal, Shinyashiki found the ball at his foot. His attempt clipped off the boot of Crew defender Jalil Anibaba where goalie, Eloy Room, had to make a diving save with his right hand.

The first half saw the Crew own much of the possession and attacks, but many died from Charlotte blocks or poor passing in the attacking third. In the last third of the half, Columbus owned over 60% of the possession. And in the 41st minute, the Crew struck for the first goal.

Derrick Etienne started the play with a through ball from the left side of the pitch that Berry tried to outrun the defender to. Charlotte goalkeep, Kristijan Kahlina, put a heavy touch on the ball played back to him by defender Anton Walkes. A slippery Hurtado, following up the play, was there to drive it into the back of the net for his second goal in two MLS games! 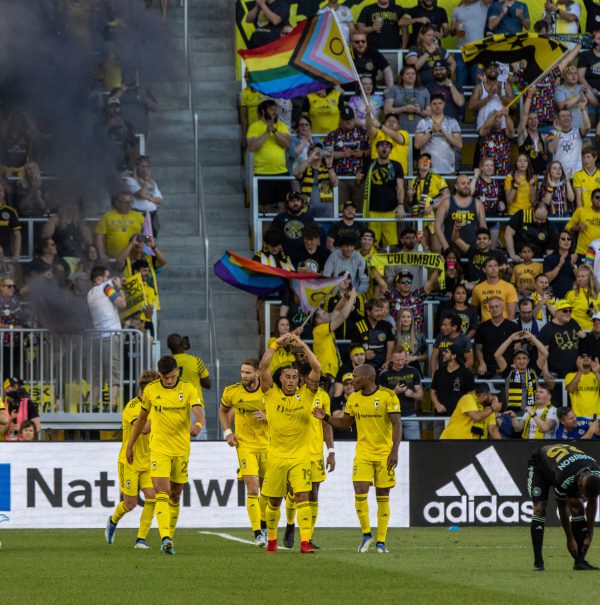 “It was a tale of two halves.”

Coach Porter’s comment about how different the two halves went stemmed from the energy Charlotte FC brought from the kickoff of the second 45. In the first four minutes of the second half, Charlotte had two great attempts on goal. Brandt Bronico, Charlotte’s midfielder, passed to Corujo, whose shot went wide. Less than a minute later, Charlotte had another good look and Room was there to save the shot.

And then in the 50th minute, the equalizer.

Charlotte midfielder Benjamin Bender was able to keep the ball from going out on the left side of Lower.com’s pitch. He fed Christian Ortiz who took a touch and struck a bullet with his left foot. Room was able to save the attempt, but the ball rolled to open space in the box. Sensing a great chance Shinyashiki quickly strode to the loose ball and drilled it to the right side of the Crew goal.

The first half saw much physical play and that might have been from the preseason game between these two. That spilled into the second half. An example of this happened after the Charlotte goal. A long ball went to Hurtado who was being covered by Charlotte captain, Guzman Corujo. It seemed that Corujo just touched the ball before crashing Hurtado from behind. Hurtado lay on the turf in obvious pain but no stoppage in play was given. A quick VAR check agreed with the no call, but Erik wasn’t happy with that. The next time the ball made it to the feet of Corujo, he was met with a hard push from the Crew forward. Referee Silviu Petrescu showed a yellow card for Hurtado’s play. From that point on, every touch by the Charlotte captain was met with fan boos. 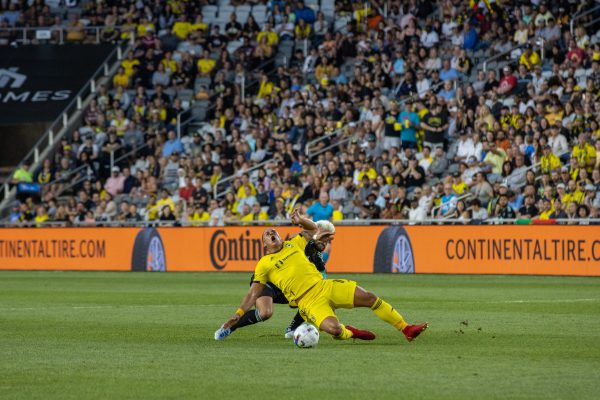 “We just lost focus on the goal…then our response for the next 15-20 mins wasn’t what I wanted!”

Between Hurtado’s yellow card and the poor passing after, Caleb’s comments after the match could be chalked up to frustration with the number of different formations used due to injuries. “[We] tried different formations to get the goal back.” But unfortunately, the final 15 minutes failed to register a shot on goal. And the match ended in a draw.

“It’s [a game] we are disappointed in,” Porter shared later.

From the 80th minute on the Crew went into an attack mode. And the substitutes added came from three unlikely sources.

Two of the substitutes brought in were from Crew2, the developmental second team MLS clubs have created to give younger players more experience. Porter said of Mo Farsi and Jacen Russell-Rose, the two Crew2 subs: “They had a right to be on the bench. That’s the type of club that we built … They earned the right due to their performance [with Crew2]. Crew2 is to challenge the bottom of the main roster.”

The other sub brought in to replace Berry was Kevin Molino, the Crew midfielder who was out since August of last year due to an ACL injury. It was good to see the former fan favorite back in for the last twenty minutes.

All was not lost, though. The Crew got a point at home. The fans witnessed an exciting match. The great people of Columbus had a full day of fun and activity, and the Crew coaches might have found a formation (namely the 3-5-2) that they could build on. “The midfield played well,” Coach Porter mentioned. “Aidan [Morris] had a good game. James [Igbekeme] had a good game. It’s a formation we can look at going forward.” 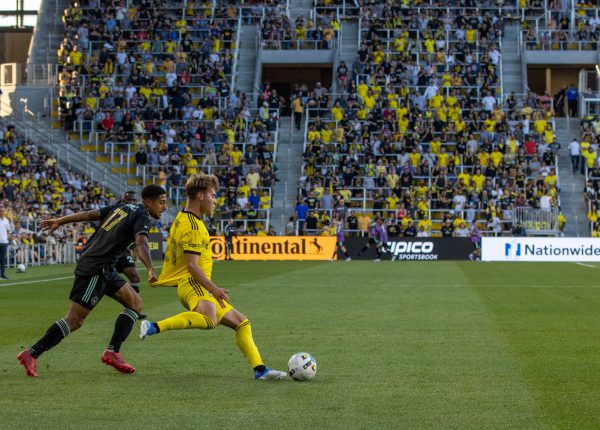 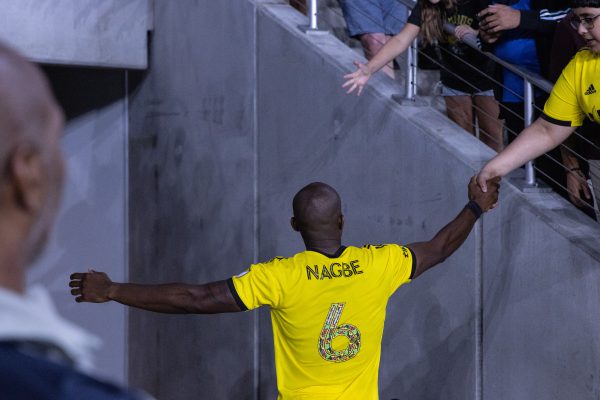 The Crew play June 25th in a 10:00 p.m. EST away match against Real Salt Lake. Then the Black and Gold take a trip to Toronto for a match on the 29th of June. They are back home July 3rd for their regular season match against Philadelphia.

Major League Soccer made major headlines on Tuesday by announcing a first-of-its-kind broadcast deal. The league agreed to a 10-year, $2.5 billion deal with Apple that will start next season. All MLS games will be broadcast on Apple TV+.