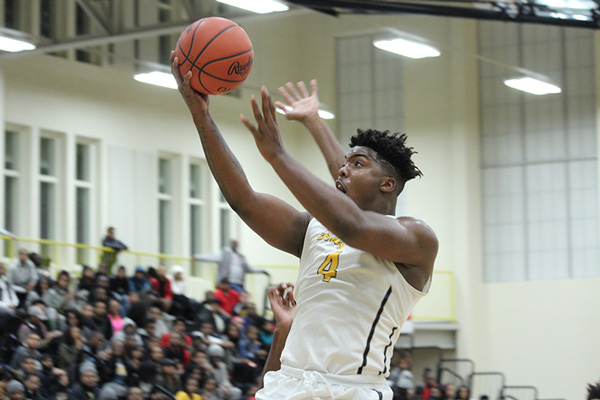 CLEVELAND HEIGHTS, OHIO– It was—literally—the only game in town on a chilly Thursday evening. Cleveland Heights was playing its first official “home” game in its new gym vs. defending Division III state champ Villa Angela-St. Joseph. The Tigers came in at 2-0 after successfully hosting the Great Lakes Classic last weekend with two victories. VASJ opened the season with a victory over neighborhood rival Euclid.

Heights quickly jumped out to a 28-19 lead after one quarter behind dominant rebounding and pressure defense. But VASJ displayed the heart of a champion, closing the gap to just six (64-58) at the end of the third quarter. When Vikings’ freshman sensation Jaden Hameed scored on a layup in heavy traffic with 6:40 remaining in the game, the Heights lead was down to four at 68-64. The Tigers regrouped behind senior standouts Yahel Hill and Tyreke Smith, however, and finished the game on the plus side of a 26-17 run. Final score: Heights 94, VASJ 81.

The Tigers’ Hill, a solid D1-level guard, finished with an even 30 points, wowing the crowd with a variety of shots from all ranges. Smith, a football standout, showed plenty of basketball moves in the paint as he tallied 26 points. Senior guard Javon Roberts also hit double figures, adding 14 to the Heights total.

VASJ’s top scorer was senior guard and team leader Jerry Higgins. Although he was called for three early fouls, he still managed to score 22 points. Hameed was next on the scoring chart with 17. Vikings freshman Enavell Lighty scored 12 points and Jason Priah, a junior, added 11.