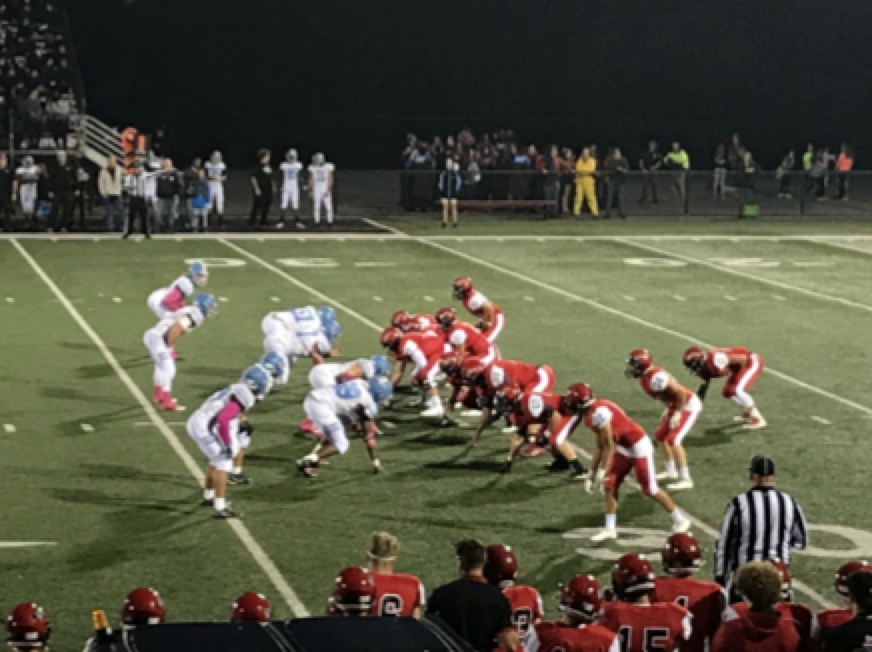 CHARDON, OHIO- It felt like the perfect fall night for some Friday night football. Despite a slow start in the Week 7 contest between Chardon and Willoughby South that saw both teams exchanging punts early on, the Hilltoppers would eventually come out on top, 38-28.

The passing game just wasn’t there for either team after the first quarter. Many carries that went for minimal yardage was the highlight of the opening frame. There were a couple touchdown stopping tackles for the South defense that ended up with a turnover for Chardon during the first twelve minutes of the game.

On the first drive for the Hilltoppers, starting running back Jon Mcknight suffered what appeared to be a left leg injury. It would be a short night for the junior as he would not return to the game after that injury. Taking over the role for the Mcknight was senior running back Brandon Frania. Frania had a solid night running the ball as he rushed for two scores in relief.

The first drive for the Rebels in the second quarter didn’t end up as expected. A throw by D’Eusanio that reflected off of one of his receivers hands got intercepted by Chardon’s Joey Trivisonno.

The very next play and their first play of the new drive for Chardon, they also turned the ball over. It was sophomore William Lewis that picked off Andrew Kobuszewski. The pressure from South’s defense got to Kobuszewski causing a hit on the quarterback during the throw. The end result was a free ball in which South came down with it to start a new drive.

The scoring drought finally ended late in the second quarter after a 14-yard touchdown run from Brandon Frania. It was an impressive drive from Chardon as they took up the majority of the time in the second quarter. That scoring play would spark both teams as it was back and forth scoring action after that touchdown.

Ironically enough, less than a minute later South finally struck the end zone after a 75-yard touchdown pass to sophomore Rico Small. After nearly 20 minutes of scoreless football, 14 points were quickly put up on the board in a span of just 54 seconds.

The scoring did not stop there as the Hilltoppers final possession of the first half ended up with another seven points. This time it was Dylan Hemly with the 10-yard touchdown run.

With just 58 seconds left in the first half, Steven D’Eusanio led the Rebels down the field and scored a late touchdown as time expired. The touchdown came from 10 yards out as D’Eusanio threw a lob to the left corner of the end zone and Rico Small out-jumped the defender and came down with an impressive score. It was a very exciting second quarter after a scoreless first quarter from both teams.

All night long the game was back and forth. As Chardon scored and took the lead, it was South that answered right back to tie the game up. That was the story of the game as it was a close and hard fought battle from the very first snap. No team really had the advantage over another until Chardon struck on offense with the big play of the night.

“This was a unique game that I will remember for a long time,” head coach Mitch Hewitt said. “There is something to be said about resilience in 16 and 17-year-old kids. Nothing really truly knocks these kids out. It’s unbelievable.”

The big play ability was there for Chardon as they had a number of big plays against the South defense. The biggest play was a 99-yard touchdown run from Wade Novak. It was an impressive run from the junior as he swerved through the defense of Willoughby South and his speed was just too much. Another big play was a 64-yard touchdown pass from Hemley to Frania. That would be Brandon Frania’s third touchdown of the game, two came from the ground and this one through the air.

The defense looked much improved coming into the second half after an up and down first half showing. The defense was led by star linebacker Chase Kline. Kline will be headed to East Lansing next year where he will play college football for Michigan State. A key end zone stop at the one-yard line in the 3rd quarter gave the defense all the momentum moving forward.

“Our defense played pretty decent in the first half,” Hewitt said after the game. “It’s really two big plays. We had one kid trip and fall and one missed tackle with 14 points on the board. They found a way at the end.”