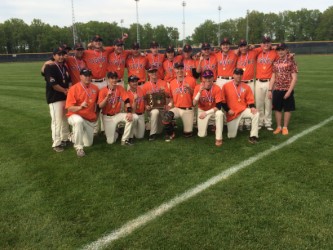 The Chagrin Falls Tigers captured their first D2 District championship since 2001 in a 3-1 win over the Cuyahoga Valley Christian Academy Royals at Stanic Field in Euclid.

The Tigers jumped to a 1-0 lead in the bottom of the first. Cole Newbauer singled home Tyler Zaluski, who hit a leadoff double.

Erik Wilson started for Chagrin Falls and kept the Royals offense in check. He gave up one run on three hits in 4 2/3 innings, striking out 1 and walking three. Only 5 of the balls put in play against Wilson made it out of the infield.

“He was awesome, he did a great job,” Chagrin Falls Head Coach Mike Sweeney said. “He’s one of those pitchers that does pitch to contact but they don’t hit them solid. He’s done that all year.”

After back-to-back walks in the 4th, Jack Reboul singled home Colin Kennedy to give the Tigers a 2-0 lead. An RBI single from Justin Bargar chased Royals starter Matt Henning and made the score 3-0 after 4 innings.

With two outs in the 5th, CVCA’s Drew Wilson blooped a ball between the second baseman and right fielder in short right field to score Chris Fair from second. It would prove to be the Royals’ only run of the contest.

Chagrin Falls freshman Jack Amendola relieved Wilson in the 5th and kept the Royals off the scoreboard in his 1 2/3 innings of work. Sweeney said the freshman has grown into the reliever role as the season has progressed.

Andrew Kwasny, the Tigers’ number one starter who got the win against Benedictine in the District semifinal, came in with 1 out in the 7th to slam the door shut and send Chagrin Falls to regionals. It was his first save of the season.

Sweeney said he could see the potential of his club when the season started.

“I just said by the end of the year we might be a force if we can get things going,” Sweeney said. “I just knew it would take a while and there was definitely some frustrating moments as we went forward throughout the season but we’re 30 games in now. We’re definitely not rookies anymore.”

The Tigers improve to 17-13 on the year and move on to play St. Vincent-St. Mary on May 26th in the Hudson regional tournament. CVCA finishes their season with a record of 14-14.