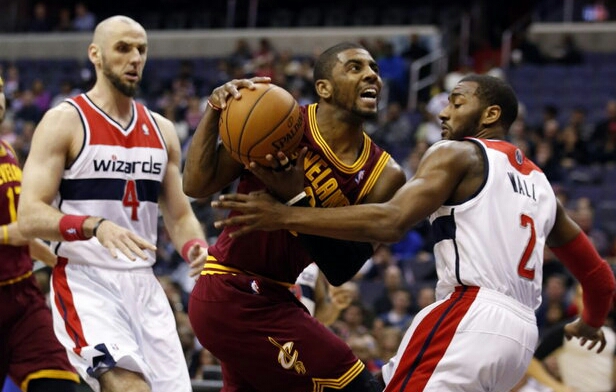 – Cavaliers (6-1, 1st in Central): Cleveland will be looking to get back into the win column after dropping a tough one to Atlanta on Tuesday night inside Quicken Loans Arena (110-106).

Kyrie Irving led all Cleveland scorers in Tuesday night’s loss, en route to 29 points and four assists in his 39 minutes of playing time.

Cleveland has made 11 or more three-pointers through their first seven games of the season, averaging 13.0 triples per contest (1st in NBA).

– Wizards (2-5, 5th in Southeast): Despite their impressive victory over the Boston Celtics on Wednesday night (118-93), led by Otto Porter’s career-high 34 points (20 in the first half) and 14 rebounds, Washington has lost three of their previous five outings.

A motivated Porter spoke with members of the media after Wednesday night’s win, saying:

“He gives you a lot of winning basketball plays. You can look at his field goal percentage, you can look at all the things that he does in his midrange game, his three-point shot has developed, as well as his offensive rebounding.”

John Wall leads the Wizards in scoring. The former University of Kentucky stand-out and number one overall selection in the 2010 NBA Draft is averaging 21.3 points, 9.2 assists, and 2.2 steals per game heading into tonight’s bout with the defending champs.

“The Polish Hammer,” formally known as Marcin Gortat, is averaging a double-double for Washington through their first seven games of the season (11.4 points and a team-high 11.9 rebounds per game). Gortat can be quite a load for opposing sides to deal with in the paint. Post-up skills, shot-blocking, and sheer size are all elements of his game.

Wizards guard, Bradley Beal, left Wednesday’s game due to tightness in his left hamstring. Despite a clean MRI result, Beal’s status is listed as questionable for tonight’s bout against Cleveland.

Tonight’s match-up marks the first of three meetings between these two Eastern Conference foes this season (at Washington on February 6th, at Cleveland on March 25th). The Cavs hold a 6-2 record in their previous eight trips to The Verizon Center.