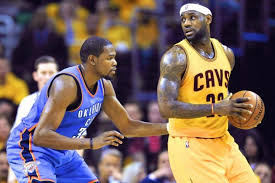 The Cavaliers travelled to Oklahoma City for their second and final meeting of the season with the Thunder.

After a close first quarter, the Cavs asserted their dominance from the second quarter on and defeated one of the best teams in the league 115-92. It was one of the best all-around team performances of the season.

It was a back and forth start to the game, as OKC led 28-27 at the end of a high-scoring first quarter.

The Cavs were in control most of the second quarter, but point guard Kyrie Irving exited the game with flu-like symptoms.

LeBron James carried the Cavs with 18 points and six assists in the half to give Cleveland a 62-53 advantage at halftime.

Russell Westbrook and Kevin Durant combined for 29 of OKC’s 53 points in the first half.

The Cavs owned the second half, outscoring OKC 53-39 after halftime en route to the 115-92 win. LeBron finished with 25 points, seven rebounds, and 11 assists. Kevin Love had a big day with Irving out for almost three quarters, as the power forward scored 29 points and grabbed 11 rebounds.

Richard Jefferson had one of his best games of the season off the bench, scoring 15 points.

The Cavs return to Cleveland for a Monday night contest with the Detroit Pistons. Tip-off is set for 7 PM.