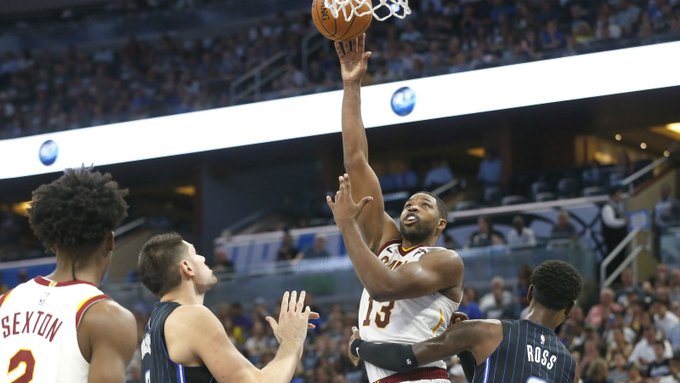 The Cleveland Cavaliers have somewhat been a surprise so far this season. Cleveland (2-2) was expected to be one of the worst teams in the NBA season, but through four games the Cavs have proved to be much more competitive than many expected. One team that learned that first hand was the Indiana Pacers, who the Cavaliers beat last Saturday night 110-99 for their first win.

Indiana hopes to enact revenge Friday night when they host the Cavaliers.The reason the Cavaliers are playing well is no secret. The Cavs have been lead and paced by veterans Kevin Love and Tristian Thompson, as the Cavaliers big men have set the tone for everyone.

The two of them have combined four eight double-doubles this season, yes they’ve each had one in all four of the Cavs games.

While it really shouldn’t surprise anyone with the play of Love, as the former All-Star is averaging  16 points and 16.8 rebounds per game. Love is also leading Cleveland with a team-high five assists per game.

Thompson one the other hand is off to the best start of his career, averaging 20.3 points per game, and his 11.8 rebounds per game are also on a career-high pace.

When these two teams met a week ago, the Cavaliers out rebounded the Pacers by 8, which was a big factor in Cleveland’s success.

The Pacers started the season with both Myles Turner and Domantas Sabonis in the starting line-up, but a slow start and a Turner injury have caused Nate McMillan to employ a smaller starting group. Turner is now listed week-to-week after suffering an ankle injury.

Cleveland will likely try and insert their dominance inside again Friday night, and then rely on an inside out game throughout the night. When the Cavaliers play from the inside out, it takes pressure off of the Cavs young guards Collin Sexton and Darius Garland.

Those two guys are definitely apart of the future for the Cavaliers, but success in 2019-20 starts with Love and Thompson.

Cavaliers first year head coach John Beilein talked with Cleveland.com about the leadership Thompson brings the Cavaliers. “He has a great attitude about being a team leader, when you care so deeply about your team, you’ll find some extras a lot of times to really grow yourself in that. The more you give to others, the more you are going to get.”