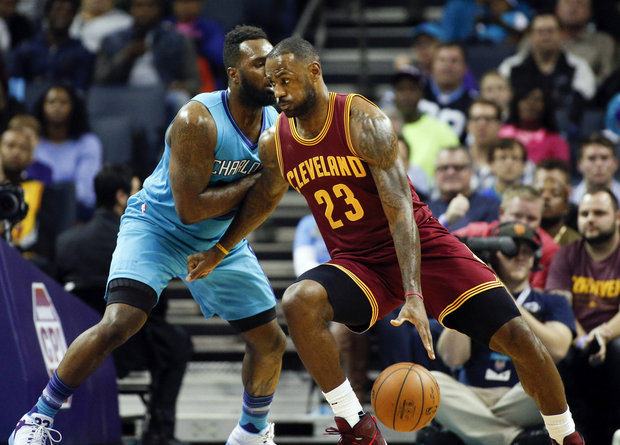 The Cavaliers played their second road game in three days, taking on the Charlotte Hornets Friday night. It was a hard-fought contest, but the Cavs pulled it out, winning 95-90.

The Hornets entered play on a four-game win-streak, and had won seven straight home games, with only one loss on their home court all season long until Friday night.

Meanwhile, the Cavs came into play with a record of 3-4 on the road, including three straight losses when playing away from Quicken Loans Arena.

Timofey Mozgov returned to action for the Cavs, playing in his first game since last Thursday, when he suffered a shoulder injury against Milwaukee. It was a much quicker than expected return for the Russian center, who was initially believed to be sidelined for 10 to 14 days.

Mozgov made his presence felt early, scoring the first four points for Cleveland.

It was a sloppy game offensively in the first quarter, as both teams shot 8 for 22 in the quarter, but thanks to Cleveland hitting their first seven of eight free throws, the Cavs led after one 23-22.

Charlotte’s depth was on display in the first half, as the Hornets’ bench combined for 22 of their 52 points, and led Cleveland at halftime 52-50.

The Cavs came out of the gate flat to start the second half, committing turnovers on four straight possessions early in the third quarter, and trailed by as many as eight with just under six minutes to play in the quarter.

Then LeBron James showed up. James hit back-to-back three-pointers to cut the deficit to four, making it 66-62 in favor of Charlotte.

LeBron would convert an “and-one” later on in the period to make it 71-69 Charlotte, as James scored 11 points in the third quarter.

The Hornets would withstand the run, however, and entered the fourth quarter with a 76-72 lead.

Richard Jefferson provided a spark off the bench for the Cavaliers, scoring five points early in the fourth quarter, and Matthew Dellavedova would give the Cavs an 87-86 lead with five straight points of his own.

J.R. Smith would follow up with a clutch jumper from the corner to make it a three-point game in favor of Cleveland with 5:30 to play.

Smith struck again with a huge three-pointer to put the Cavs up by six, and then grabbed a steal on the other end.

The Hornets had a chance to take the lead with 24 seconds to play, down by two, but Nicolas Batum would miss a three-point attempt, forcing Charlotte to foul Smith with 13 seconds to play, who, in turn, hit both free throws to make it a two-possession game and seal the deal.

The Cavs would go on to win 95-90, earning their first victory on the road in two weeks, when they beat the New York Knicks on November 13th at Madison Square Garden. The Cavs improve to 4-4 on the road on the season.

The trio of Jefferson, Delly, and Smith combined for 19 of Cleveland’s 23 points in the fourth quarter, and the other big story of the quarter was the Cavalier defense.

Cleveland held Charlotte to just 14 points in the quarter, as the Hornets shot 6 for 23 in the final period.

LeBron posted a typical night with 25 points, 13 rebounds, and five assists. He has now won 21 straight games against Charlotte, combining his time with the Miami Heat and Cleveland Cavaliers.

Kevin Love notched his 11th double-double of the season, with 18 points and 16 rebounds, despite sitting out the fourth quarter, as Head Coach David Blatt opted to go with a smaller lineup featuring Jefferson against the under-sized Hornets.

The Cavs improve to 12-4 on the season and return home to take on the Brooklyn Nets Saturday night at 7:30 PM.