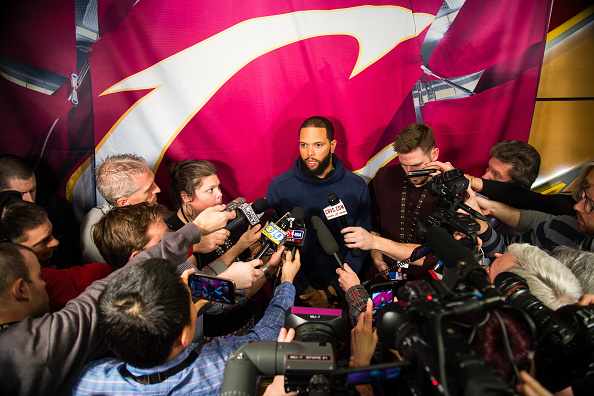 The Cavs and their fans will have their first look tonight at their newest player, as veteran Deron Williams will get his first playing time with the defending NBA Champions.

Head coach Tyronn Lue said at shootaround today that the team will look to ease the three-time All-Star into getting use to playing with the team.

“Just use him in a backup role, get him out on the floor and get him acclimated to what we are trying to do,” Lue said. “It’s going to be a process, but we look forward to that process.”

Williams officially joined the team on Monday after the 13-year veteran had his contract bought out last week by Dallas.

Lue said that getting Williams to get the team in the right spots on the floor will be an early key into easing him into the offense.

“Deron is going to have to run our offense and get us into our sets,” Lue said. “He’ll have to pick up things quickly which I know he can.”

Williams isn’t the only new player on the roster, as the team is also adding center Andrew Bogut, who announced last night that he’s ready to join the Cavs to make another run at a title.

In the case of Williams though, the Cavs have added a solid vet who can hopefully be a big addition to the team’s spring and summer title run.

“Just having him here, having him sustain leads when we get leads, having that veteran leadership on the floor is going to be big for us,” Lue said.