Cavs Can Clinch #1 Seed Monday, But It’s Far from A Guarantee 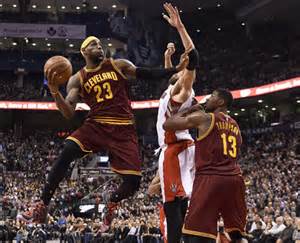 The Cleveland Cavaliers enter Monday still atop the Eastern Conference standings in first place with two games remaining in the regular season.

Many fans and players alike are sure to be tired of the regular season and ready for the playoffs to start, but although it may come as a surprise, we still have some meaningful basketball games to watch in early-April.

If the Cavs would have taken care of business more early in the season, they could be resting LeBron James and/or Kyrie Irving, Kevin Love, etc.

But right behind the Cavs in the standings, the tenacious Toronto Raptors are only two games out of first place.

What is important to remember in this playoff picture is that Toronto won two of three regular season head-to-head meetings against Cleveland, so if the teams finish with the same record to end the regular season, the Raptors would get the number one seed.

Maybe this is meaningless anyway. Last season, the Cavs were the #2 seed and swept the #1 Atlanta Hawks, even with Irving banged up and Love on the sideline.

But this season has taken on a different life than last year. The Cavs were riding a wave of adrenaline and consistently exceptional play after starting the 2014-2015 season 19-20, and finishing the regular season 34-9.

This season, inconsistency has been the identity of the team.

To make matters a bit more interesting in the playoffs, this Eastern Conference is not the laughingstock of a year ago.

Toronto may not have the same regular season record as the Hawks did in 2014-2015, but they are still only two games behind the Cavs.

And if so many people view the Cavs as a championship-caliber team, what does it say that the Raptors are breathing down their necks?

Toronto has two things that the Hawks did not in 2014-2015… Their names are Kyle Lowry and DeMar DeRozan. Both of them have developed into star players.

If they played in a bigger market and had more games on national television, maybe they would get the credit they deserve.

Stars always come out and shine in the NBA Playoffs. The cream always rises to the top in the big games. And Toronto is a force to be reckoned with in the Eastern Conference. Lowry and DeRozan are both veteran players now who have been through the grind of a couple postseasons, and should not be taken lightly in a seven-game series.

If Toronto gets the #1 seed, there is potential for a Game 7 matchup between the Cavs and Raptors north of the border.

The Cavs have played much better at home this season, as most teams do, but even if someone is of the opinion that Cleveland will still get the win, it can’t make the game any easier if it’s on the road.

The Cavs have maintained first place in the East through all the ups and downs of the season. That has been one of the saving graces that supporters of the Wine and Gold can always fall back on.

What’s there to complain about? The Cavs are still in first.

If they choke at the end of the season, that argument then falls flat.

But the same people who scoff at losses to bad teams and don’t read anything into the regular season will most likely then fall back to the argument of “Who cares? It doesn’t matter if the Cavs are the #1 seed anyway.”

The most frustrating aspect about this situation is that they should not even be in this position right now. With all the talent and potential for greatness that this team has they should have locked up the #1 seed a week ago.

It’s not like they are in the West with Golden State, San Antonio, and OKC. But some of the credit has to be given to Toronto. They have kept up the pace for most of the season.

Meanwhile, the rest of the East is fighting tough all the way to the finish.

All the Cavs have to do to clinch the #1 seed is win one of their next two games against Atlanta or Detroit.

It won’t be as easy as it sounds.

Atlanta is in a four-team race for the third-seed in the Eastern Conference. The Hawks currently hold third place, just one game ahead of the Celtics and Heat, while Charlotte is two games back in sixth place.

Atlanta wants to maintain third place for a number of reasons, but most importantly because it means they would not have to face the #1 seed (which we hope to be the Cavs) until the Eastern Conference Finals, assuming they make it that far.

If the Hawks are able to win a first-round series against most-likely the Charlotte Hornets, their next series would be against either Toronto or Detroit, as it stands.

For this reason, the Hawks will be bringing their “A” Game to Cleveland on Monday night.

Meanwhile, the Cavs appear to be in that “ready for the regular season to end” mode. A loss to the Bulls on Saturday night and the Pacers the game before that shows they are not overly concerned with finishing the season strong.

Regardless of whether that is the right or wrong approach, fans should not expect the Cavs to come out and win easily against a Hawks team that will be giving their all at Quicken Loans Arena.

It would not be a surprise at all if the Hawks win.

The Raptors, on the other hand, would love to snatch the one-seed from Cleveland on the last day of the season. They play the lowly 76ers on Monday night, and the almost-as-lowly Brooklyn Nets on Wednesday.

It would be reasonable to expect the Raptors to win both of those games.

The playoff picture may very well be determined by how the final night of the regular season goes.

Let’s say the Cavs fall to the Hawks, hypothetically. If they win, then we’re all set and Cavs are the one-seed. But if it comes down to the last day, the Detroit Pistons, who are just as motivated as the Hawks, come to town.

Detroit currently sits in 8th place in the East with the same record as the Indiana Pacers, who hold the tiebreaker between the two teams.

The Pistons will want to do everything they can to get the seventh-seed. They won’t know the result of the Raptors vs. Nets game on Wednesday night, which starts at the same time as their game.

The bottom line is that Atlanta and Detroit will be playing 100 percent with extra motivation to drive them in their two meetings against the Cavs.

Do we know that we can expect the same out of the Cavs?

Toronto’s favorable schedule and the Cavs timely matchups against teams in the thick of the playoff race will make these last two games interesting.

Hopefully the Cavs can settle everything with a win on Monday night and they can rest LeBron on the final game of the season.

Something they could already have been doing for the past week had they not piled up a number of losses to bad teams this season.

But to the fans who don’t care if the Cavs get the #1 seed, do they care if LeBron gets rest either? It’s not like that would ever come back to haunt them down the road.

To the fans who don’t care if the Cavs get the #1 seed, would you prefer having a less-rested LeBron and a more difficult postseason road, which could involve a potential Game 7 in Toronto?

Is that a more ideal scenario than clinching home court? Fans can keep telling themselves none of it matters, but if the Cavs do end up choking and finishing the season on a four-game losing streak, all of this may play a big factor in their run to the championship.

Let’s see if they put all this to rest on Monday night.

What’ Going On This Weekend In Sports And Beyond!
Cavs Guard Iman Shumpert To Miss Final Two Games of Regular Season